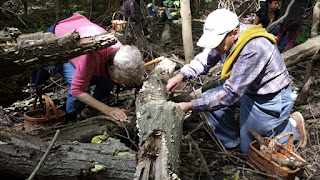 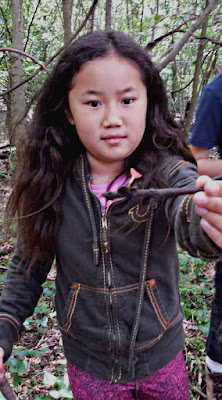 Sylvia and Dennis and young Sonya were among the 10 of us treasure-hunting in the woods one day during this nice rainy May, finding in two hours more than 30 species of fungi where at first we didn't see any at all, because most specimens were tiny and the big flagrant diva mushrooms, such as chickens, or milkies (they "bleed" milklike liquid), are about three weeks away. Among our finds: Sonya has found a Stalked Scarlet Cup (Sarcoscypha occidentalis), and (below) the 1/2-inch "eyelash cup" (Scutellinia scutellata), yellow with unmistakeable "eyelashes," which I have greatly enlarged for detail. For edibles, on this trip we found only wood ears. We think that fungi, the fourth Kingdom of creation, are the coolest, most outrageous stuff our earth produces--in my view, second only to the mineral Kingdom's gemstones. Guess we're easy to please. You'll notice we (as do Sylvia and Dennis) carry woven baskets and within them waxed sandwich bags to hold their specimens. Crazy people and woven baskets traditionally go together. You can always tell shroomers by our baskets and our socks pulled up over our pant legs. Posted by Divinebunbun at 9:40 PM No comments:

How Do You Mend?

#1: After two dates and making a third date, for trout fishing, text arrives from #1 cancelling, saying he thought he could handle two relationships at once but he felt so guilty and needed time to straighten things out with his long-distance girlfriend of three years, whom he sees only on weekends, but I was so interesting and attractive that if he did break up with her, could he call me?

#2: Charming, cosmopolitan date so mutually thrilling that two days later we meet again at a cafe, where he delivers, out of the blue, a most cynical two-hour harangue on politics city, state, national, and global, with a preview of the coming apocalypse. After several courteous and failed attempts to change the subject or get a word in, I openly showed boredom, but it was as if I were not there. Realizing that I would honestly prefer to be having coffee with Todd Aiken, I say a polite goodbye. Text arrives that evening asking do I like him, and apologizing that he sometimes talks too much, and he is such a progressive that some people are not used to it.

#3: Scientific type agrees to meet. The day before, I email him to confirm. He replies he can't make it, is too busy with work, and will call "in a couple of weeks."

#4: World-class tightwad, age 68, who brings me an empty wine bottle because it's pretty, is plainly told that we can be friends but no more than that. This sets him on fire, not to go out on actual dates, but to take long hikes together and send me late-night drunken texts. As a friend, I accompany him to his colonoscopy, and when he awakens he warns me that he is naked beneath his gown and I am not to peek.

How to Suck Honey from Honeysuckle

Today I met Ben, who taught me how to pluck a honeysuckle blossom and taste the clear droplet of sweet nectar (before a bee gets it). Ben says when he and his friends are outside they sometimes get distracted by honeysuckle and forget the game they were playing. He says, furthermore, that honeysuckle honey is addictive. In the 20-second video, Ben shows how it's done. Written instructions are below.
Written instructions:

1. Pluck 1 trumpet-shaped honeysuckle blossom.
2. Find the tiny green bulb at the blossom's base. Pinch it lightly and slowly pull it out of the blossom. This draws out the thin green stamen.
3. On the tip of the stamen will be your drop of honey. Place on tongue.
Posted by Divinebunbun at 5:45 PM No comments:

Cats Do Not Belong Outside

All I wanted was a short walk and I had to step over this and think about its life and death, its owners who must have loved, admired, fed, and held it and are probably now wondering when their pet will come back to its fine warm safe indoor home, just right for a domesticated animal. They let their cat out so it could walk on the wild side, chase a few mice, kill a few birds, get some exercise; or perhaps they weren't watching and it escaped, wanting adventure instead of lazing around the house looking elegant. Its cream-colored tail lay about 12 feet away. Please keep cats indoors; letting them roam is the same as killing them. A few feral cats live around here, and while they might survive for a season they all meet the same fate; I know that because I walk these roads. Letting your dogs run loose isn't a good idea either.
Posted by Divinebunbun at 1:00 AM 1 comment:

Cited as one of the most grotesque moments in English literature, Tennyson's poem "Flower in the Crannied Wall" goes like this: 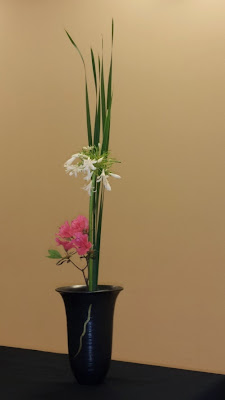 What's grotesque about that is he's singing its praises having torn it up by the roots and killed it: very white western patriarchal. Japanese flower arranging (ikebana, meaning "flowers kept alive") was demonstrated at the History Museum and I was fascinated by the arranger's concerns as she made the arrangement seen at the left. Ikebana cares about movement in their arrangements, thus the tall leaves that wave a little. Then she arranged the white flowers, and then said the arrangement needed depth, and thus the pink flowers. I have often arranged flowers to my satisfaction -- with good flowers one can hardly do it wrong -- but the result of this very conscious and minimalist approach mesmerized me. Right now I have purple irises in the lawn I'd love to cut and arrange, but I think the way the irises have arranged themselves cannot be improved upon.
Posted by Divinebunbun at 10:32 AM No comments:

Two trees embracing and kissing on the Divine Property, and I never noticed them until now. Views from both sides.
Posted by Divinebunbun at 10:12 PM No comments:

I tramped in the woods wearing low-cut shoes although I know better, and at home rinsed and toweled off my legs to dislodge chiggers and ticks, but didn't scrub with soap and water, and the next day enormous red blistered patches were blotching both ankles and one spot on my calf. Last time I had poison ivy I saw a dermatologist (15 years ago, back when you could get in to see a dermatologist), which reminds me:

Friend developed rashes shaped like a map of South America up and down her legs, and they were enlarging. Worried and feverish, she called the dermatologist, then another, then another. No appointments were available for a whole year. She went to a dermatologist's office anyway and told the receptionist she'd sit in the waiting room to see a doctor, even if it took all day or all week. Finally one saw her. Friend had Rocky Mountain Spotted Fever, a tick-borne, potentially fatal illness. They got her the medicine and then, really oddly, thanked her for coming in.

But poison ivy must run its course of 3 itchy, miserable weeks, doctor or not, so I used the standard treatment, cortisone ointment, but still itched. Finally I anointed the bright-red rashes on my ankles--they blistered and itched the most--with coconut oil. The next day the ankle patches (bottom of photo) had lost their redness, while the untreated calf patch (at the top) was still bright red. Used coconut oil on all patches for another night. Redness and itching faded. What a relief. Photograph taken three days after getting poison-ivied. I hope this information helps someone.
Posted by Divinebunbun at 7:42 PM 1 comment:

What's In That Puddle and Under That Rock?

Two days ago a friend with a keener eye than mine spotted along the trail, in a puddle, hundreds of tiny black dots with tails, swarming and swimming: Spring Peeper tadpoles, and we rejoiced at the new life and watched them. Two days later I brought my camera, and the puddles were there, but smaller. And the tadpoles were there, but lifeless. All of them.

Longing to see new life again, I walked to the stream, and at my approach all sorts of unseen creatures made splashes and fled, and in the water I hoped to
see live tadpoles, fish, or a crayfish (sign of very clean streamwater). Nothing. Then I turned over a rock and found a caddisfly larva case, built by larval caddisflies that develop in them underwater, unseen. It isn't an egg case; they hatch from a mass of gel. Caddisfly larvae will take gravel, crumbs of wood, beads, any material, to glue together a cylindrical case, glued to rock, where they pupate for 2 to 3 weeks. Caddisflies are also indicators of a healthy stream. I returned the rock to its original position.
Posted by Divinebunbun at 3:38 PM No comments:

How to Find Women's Shorts 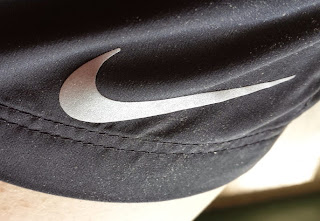 Last year a middle-aged lady seeking summer shorts found in the stores only shorts with 3-inch inseams--or 2-inch, or 1-inch--meant to show a lot of leg. A lot of thigh. This being unacceptable, she inquired of the Old Navy clerk, who said that was the only kind they had. On the way out, Middle-Aged Lady saw the men's shorts and grabbed her size (30) and tried them on. They fit very well (not perfectly; they don't have the same cut) and had 7-inch inseams. She bought khaki and navy blue--furthermore, made with serious pockets, and CHEAPER and BETTER SEWN than the women's, which were flimsy.

This year, Middle-Aged Lady sought summertime sport shorts, Dri-Fits, for hikes, forays, spin class, and days just too plain warm for cotton shorts, and the dozens of styles and brands of colorful women's sport shorts at Dick's Sporting Goods all had 3-inch or 2-inch inseams. The clerk said that was the only kind they had. Guess you're not supposed to be athletic and middle-aged. Lightbulb goes on and Lady locates the men's shorts: Basketball-type with very long inseams; compression shorts; running shorts with male briefs inside (would require that Lady use her sewing skills to remove the brief). She picked up and tried on a weightless, well-vented pair of Dri-Fits from Nike, 7-inch inseam, called the "Freedom" model, made without the inner brief, featuring two front pockets and a zippered key pocket, comfortably wide-legged so on her body they look like culottes (who remembers culottes?!?). She couldn't find the pricetag so she asked a clerk and he found it and said, "Forty-five dollars," and the Lady blanched, but purchased men's size Medium, which accommodated her curves, along with inflation needles for her basketball. At home she put the shorts on and has now taken them off only to sleep. The next morning before spin class she ordered a second pair online, exact same, same price, and hopes they last.
Posted by Divinebunbun at 2:59 PM 1 comment: 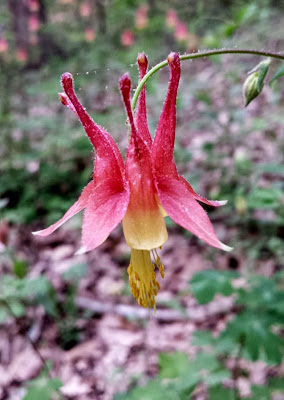 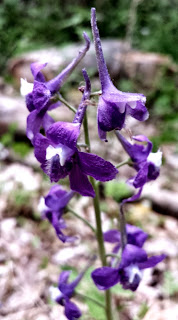 The most inexplicably shaped and colored woodland wildflowers bloom in May, right now, and these were found at Glassberg Conservation Area: Dwarf Larkspur ("of the buttercup family," says the Ozark Wildflowers guide; what a wonderful family!) and Columbine, also called "aquilegia" (above). The guide says of the columbine, "Omaha and Ponca men rubbed pulverized seed on their palms as a love potion before shaking hands with a loved one. This practice was also supposed to make them more persuasive when speaking to a council." Guess I'll go back and pick it. (No, I won't really.)
Posted by Divinebunbun at 8:35 AM No comments: