What Is It About Old Stuff? 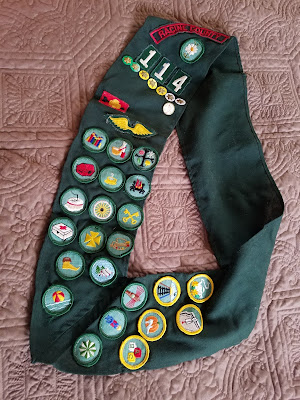 I rearranged my bedroom to look as much as possible like a hotel room for no reason except that I adore hotel rooms, private, clean and comfy, pillows and towels plumped and straightened beautifully and magically every day while I'm out doing something fun, and I'm ecstatic and smitten out of my gourd if it's a firm mattress with--oh, rapture!!--white or cream-colored shadow-striped bedsheets.

So I bought the sheets, and a hotel-looking bedspread and pillow covers, and then rearranged the room, dragging to the garage a battered old metal foot locker given me when I started college, which nice ladies filled with "hope chest" doilies and linens -- boy, did they get a wrong number! -- I was 17 years old and the Vietnam War had ended the previous year so maybe foot lockers were on sale. It had not been moved in 16 years and was locked. Total genius me, I knew exactly where its key was: in the junk drawer, on a key ring that's a souvenir of San Francisco where I've never been: the carefully preserved "key ring holding keys I never use."

Inside the trunk lay Christmas things like stockings and "crafty" tree ornaments that had lost all their crocheted and decoupaged charm, and two green-and-maize rough woolen woven placemats, except they were too small for placemats, as ugly as they sound: a souvenir from Ireland from a certain mother-in-law, God rest her soul; all this I threw out. At the very bottom in a plastic casing was my old Girl Scout sash I thought I'd lost years ago.

You had to "graduate" from Brownie to Junior Girl Scout to get a sash to sew badges on, if we earned them. Nerdy girls earned badges enough to fill the front of the sash and start up the back--Girl Scout cool. The next step up, Cadette Girl Scouts, earned badges with yellow borders instead of green. Earning each badge required genuine mastery: 10 or 12 steps increasing in difficulty, and each step had to be shown to or performed in front of an adult, the Scout leader, who'd sign off on it. I remember most the intensity of earning the Needlework badge. Several wars later, I can still cross-stitch, huck-a-back-stitch, satin-stitch, applique, whipstitch, hem by hand, tie French knots, darn small holes, and what-all. It's the leftmost badge in the third row, above the first-aid box.

(I don't remember any first aid, though. When I'm accidentally cut or stung the first thing I do is swear.)

I left Girl Scouting halfway through Cadettes because the badges had increasingly discouraging requirements: The "Aviation" badge asked us to correctly fold and pack a parachute. I earned the "easy" ones like dressmaking and storytelling and dropped out.

Today with one click I ordered airline tickets like it's nothing and from Amazon.com a programmable coffeepot for my mock hotel room, so I will wake up to coffee or hot water for tea without moving from the bed, and the coffeepot arrives the next day.

Posted by Divinebunbun at 10:00 PM No comments: 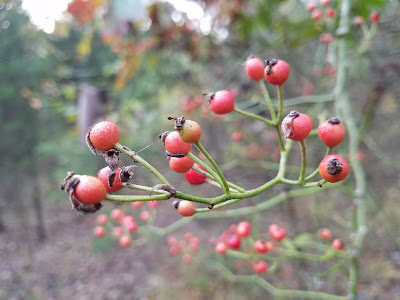 Hawthorn berries, currently ripening to a lovely carnelian red, are called "haws" and are both medicinal and full of cyanide. The seeds, if you ingest them, turn to a terrifically poisonous gas, hydrogen cyanide, in your intestines, and that is a stomachache you do not want to have. The flesh, though, is said to be good for blood pressure and heart issues. I think I'll leave all that to the experts and to the birds who eat these berries, and simply admire them.
Posted by Divinebunbun at 11:03 PM No comments: