A special guest star joined the army worms aka tent caterpillars in my dining room last night: a young blacksnake. His mom lives beneath the kitchen floorboards and is as thick as my wrist. Already crazed by the hundreds of crawling things in my house, I approached him with a camera hoping he'd dine for me on nearby caterpillars. He gave me a full-on, like totally natural, snake dance.

Posted by Divinebunbun at 8:00 AM 3 comments:

Why Caterpillars Infest Your House

The army worms or tent caterpillars of May 19 had dispersed in the morning but returned to my house at night, this time to the kitchen. They crept up walls and cabinets, through the red-pepper barrier beneath the door, and squashing them left and right I thought I'd go mad, using up paper towels and tissues, finally bringing out the vacuum, harassed, disgusted. Worse than ants. There is nothing in this house for caterpillars to eat, no plants, no breadcrumbs.

But there were none in the guest room although last night they were there by the hundreds; only in the kitchen. Their doors are only a few feet apart. Why were they choosing only the kitchen this evening? (Want to see them crawl? Video, 35 seconds.)

Answer: Light. The guest room was dark tonight but the kitchen was lit. Army worms are caterpillars, soon to become moths, and moths are attracted by light. It must be that caterpillars are, also.

Searching the Net (briefly, because in a minute I'm going to bed and turning out all the lights) I couldn't find this conclusion anywhere else but in a book published in 1896 by the Massachusetts State Board of Agriculture. But I'm telling you: Caterpillars invading your house at night? Shut off the lights!
Posted by Divinebunbun at 12:01 AM 2 comments:

Invasion of the Army Worms 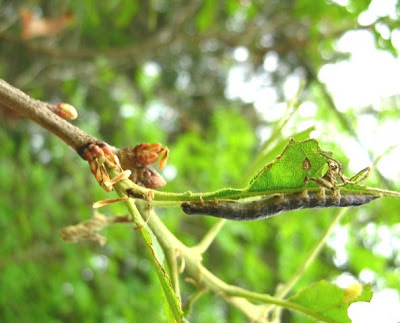 The army worms or tent caterpillars hatched, millions of  'em. I figured they were a feast for birds, but they crawled like an army toward my house and then at lights-out in the guest room, about 2 a.m., I saw Pseudaletia unipuncta crawling all over my walls and carpeting. . . they kept advancing. . .I vacuumed up maybe 200 in all. Wondering where they found entry, I stepped outside, and the stoop and the door were PAVED with the crawly things (dropping thousands of black pinhead turds), and around my head buzzed a universe of wasps dive-bombing and eating them. Immediately I threw lime over the largest mass of worms, and then bleach, and then powdered my threshold with ground red pepper. 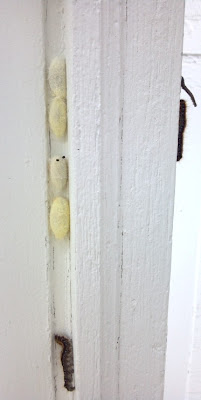 With a sigh I lay down in bed only to see one descending from the ceiling via a silken string. Grabbed it with a tissue. They spurt reddish-brown when crushed. (My kitchen floor looks like somebody cut an arm real good with a chef's knife.) The next morning I found a worm sharing my bed. (That's not a joke; that's literal truth.)

So shocked was I by the nighttime home invasion I didn't take many photos until this morning when I surveyed the battlefield with all the satisfaction of my ancestor Genghis Khan. Then I examined what these caterpillars had done to plants: skeletonized the leaves [see above photo], and they were still at it, so many thousands that their crunching and droppings are audible, like light rain.

When they find a suitable spot they begin growing white fuzz to cocoon themselves [photo at right], hoping to become moths in a little while. I have never ever seen an invasion of army worms like this. Their ranks also included true inchworms (thin green ones), and fat green caterpillars. I vow to fight them to my last pepper flake.
Posted by Divinebunbun at 11:59 AM No comments: 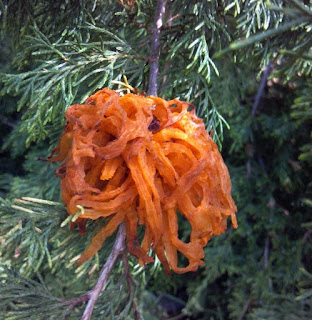 A new low: People throwing spaghetti from their cars into the roadside trees, I thought. But this showy jellylike ornament on a cedar branch, common after heavy spring rains, is Cedar-Apple Rust, not a fungus but a gall that grows only in the presence of both red cedar trees and trees in the apple family (including the hawthorn tree, bearer of Missouri's state flower). The same spherical gall can flower brilliant pumpkin-orange like this repeatedly during the spring, when rainy days alternate with dry. In a sinister and monstrous way it's pretty but not good news for the tree, and it's contagious.

A website explains: "Spring rains cause horn-like structures, called telia, to extrude from galls. When these horns absorb water, they become jelly-like and swollen. Between rains they dry to dark brown threads. The telial horns are comprised of thousands of two-celled spores called teliospores. Swelling and drying of telial horns may occur 8-10 times during the season. Each time, the horns push out further and expose more teliospores until the supply is exhausted."

I suppose it's just trying to make a living like everybody else.
Posted by Divinebunbun at 11:49 PM No comments: 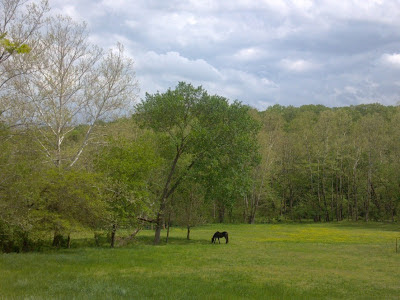 The club chairman asked for a volunteer to host a distinguished astrologer in May and nobody raised a hand so I said, "I will, but it'll be the weirdest experience of his life. My house is Green Acres. And it's 35 miles from the city." The club didn't listen, was merely relieved that somebody would put up this stranger, a Minneapolis man of 67 with a national reputation, while he gave talks in the area and read horoscopes for clients.

I prepped my place with 2 spring cleanings and stocked the fridge with man food: beef and beer. After the cold wet spring, Missouri was suddenly blessed with perfect weather full of lilacs and irises. He said that in Minnesota trees don't have leaves yet. Cardinal birds, bluebirds and hummingbirds amazed him. My woodpeckers drummed on the old TV aerial (sending metallic ringing throughout the house) early each day to wake me up to feed them. Fortunately he had a sense of humor.

Unfortunately he was tall and my guest room, a former garage, is low-ceilinged, but he was extremely gracious -- after all, he'd elected to stay in a stranger's home, not knowing whether I was a nut or neat freak or nympho or what. Fortunately I am none of those and enjoyed his companionship and cooking for him and he gave me a free three-hour horoscope reading. He said he liked horses so we walked to the horse farm (in the photo). He said, "You live in paradise." I said, "Yes, I know."

A city friend asked, "A strange man in your house? What if he tries to hurt you?" I said I'd shoot him. But he was a perfect gentleman and a mensch, into ice cream and fine bakery, and we indulged in these as well as dark beer and spiked lemonade.

He was one of the rare guests that after he had showered and shaved you could not even tell he had been in the bathroom (a very obvious sign that he is married). The old saying is "houseguests, like fish, stink after three days," but he spent five days here and I actually wished he would have stayed longer. 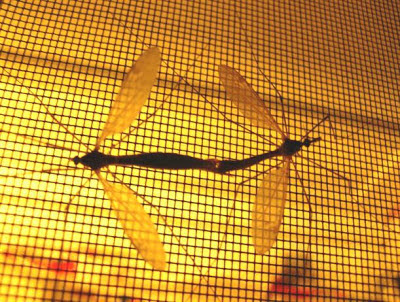 Returned from a hike and in my absence two huge mosquitoes had hooked up and were doing the wild thing on my kitchen screen door. I spent half a hour getting a good photo and they are still there. The least I could do was continue my Divine tradition of bringing you photographs that no one else will.

It's been very rainy and just got warm enough to turn off the furnace, so I think this photo might be a hint of things to come. All Eastern Missouri is one big puddle of standing water. I got the last bottle of lavender-scented soap that was on the shelf at Wal-Mart. (Lavender is a mosquito repellent.)
Posted by Divinebunbun at 10:32 PM 1 comment: 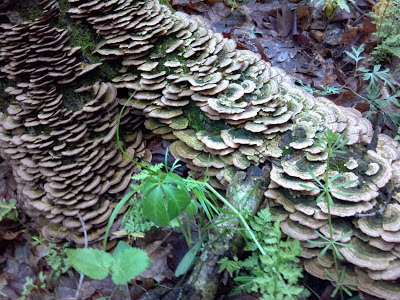 The soaking rains of April and early May, interspersed with a two-day span of warm sunshine, gave this live tree trunk in the woods a whole gown and train of fresh Turkey Tail mushroom (inedible). In eastern Missouri, luckily, it simply rained, and we didn't end up with the five inches of snow that Kansas City received on Thursday night and Friday morning. However, we eastern Missourians have no idea whether to wear our parkas or our cutoffs or our snow boots or sandals.
Posted by Divinebunbun at 7:06 PM No comments: