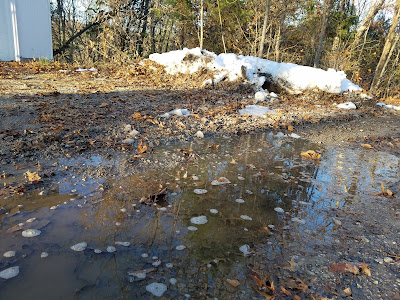 Winter came early, with snow on November 8, and then an actual 4 inches of snow in this area this past week. When the snow ceases, the snowplow comes. The plow is a benefit for tenants, and I am grateful because, frankly, I have tried to shovel 100 yards of snow but every time, I failed.

Once, before the snowplow, a 50-pound bag of ice-melting salt was delivered here after a blizzard, left in the middle of the lane in front of my house. I could not move the bag, or even drag it, so I slit it open and carried the salt one shovelful at a time downhill to highway's edge where the most treacherous ice forms. After I did that 20 times, the bag of salt diminished and I dragged it away from the middle of the lane so the car could get out.

The plow is so much better, and the plowman courteous enough (now that I have asked) to clear the space in front of the garage so I can back the car out, but his blade scrapes the last gravel from the non-paved lane, leaving thigh-high drifts of gravel and snow, and soupy mud as the snow melts. I call it the "Slop-o-Rama." In front of the garage it looks like this.
Posted by Divinebunbun at 4:42 PM No comments: 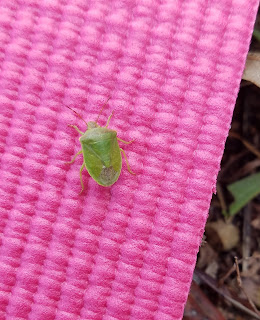 After regular laundering, the stink re-activated with wear, so I tried vinegar, then baking soda, then color-safe bleach, then vodka (that's a trick for deodorizing theater costumes), then eucalyptus-based Mirazyme, specially formulated for stinky and skunked gym and camping clothes. When the stink persisted, I threw the clothes away except for two sport tops made for mastectomy ladies and therefore rare and blanch-your-face expensive.

Online I googled "stinky clothes" and read about OxyClean Odor Blaster. Last night I dissolved scoops of OxyClean in hot water and poured that brew into cool water and stirred stinky clothes in it while chanting. Instructions mandated a seven-hour soak, followed, per instructions, with a regular wash that included OxyClean. The tops are now air-drying. I will let you know if OxyClean is the one. 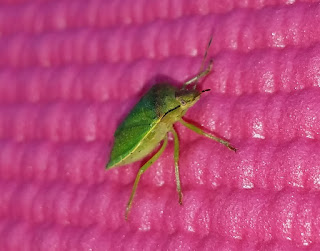 Perhaps not coincidentally I remembered my yoga mat -- bright pink, unrolled on floors and carpets I know are teeming with bacteria because the one time I set my chin on my mat I broke out like a teenager -- and put the mat outside in the sun, to air and purify. Later I returned to find on my pink mat a brilliant lime-green bug doing the Balasana, or Child's Pose. Looked up the type of bug so I could tell you. It's called the stinkbug.

Some days have a theme and some don't.
Posted by Divinebunbun at 8:50 PM No comments: