In the road I saw, in last night's rapidly melting snow: 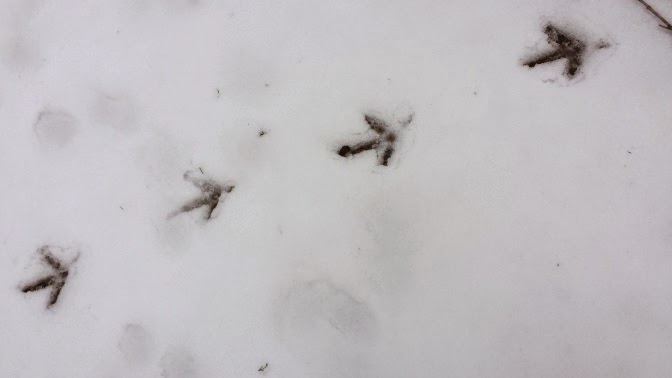 and decided I'd follow the track back to its source. The wild turkey had crossed a frozen creek, a little tentatively. . . 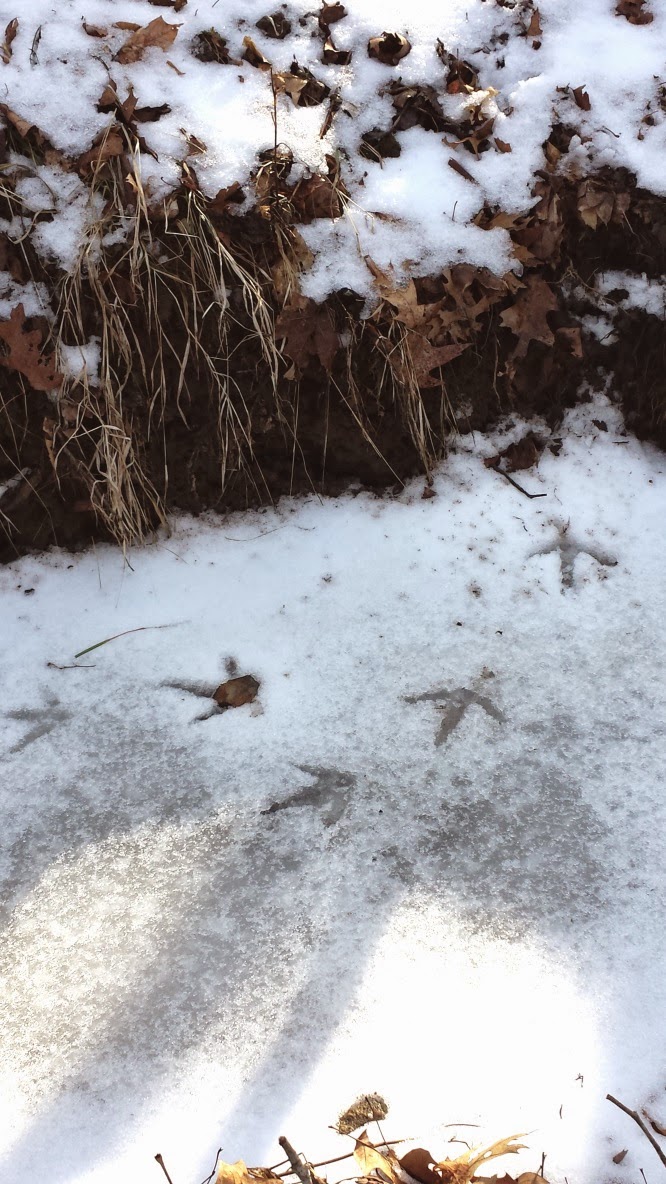 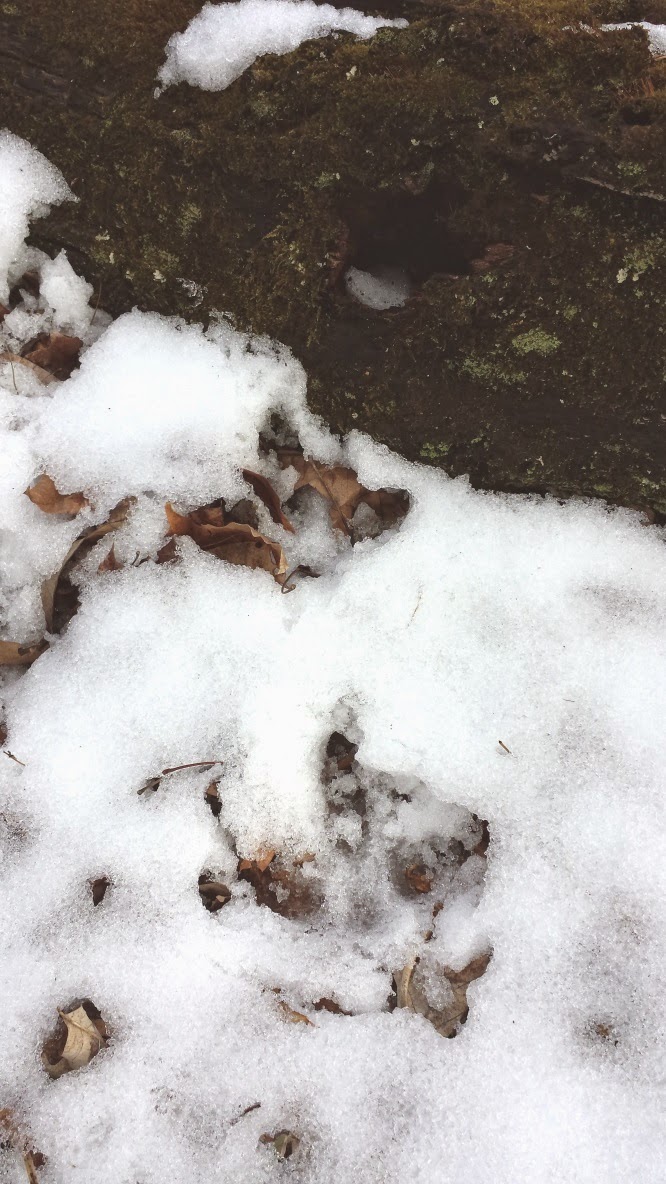 and before that, had stepped over this log. The melting snow made the tracks more difficult to trace, but they led to a known game trail. The turkey had crossed paths with a rabbit: 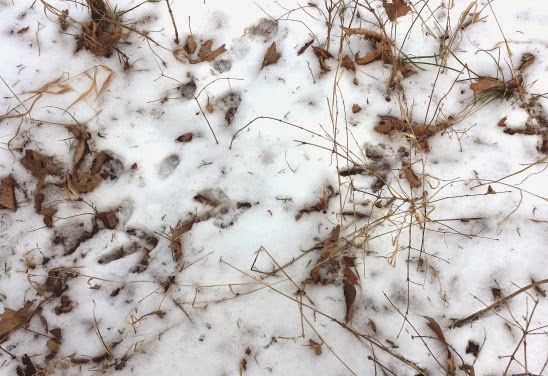 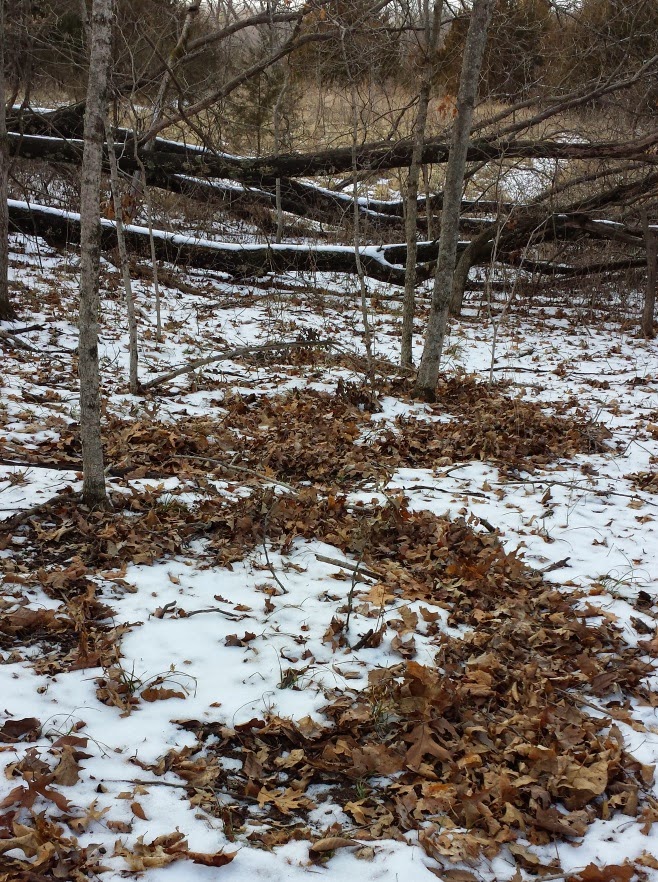 and the tracks ended in the canopied woods, where the bird had scratched up leaf litter not once but twice, seeking food. And before that it probably spent the snowy, sleety night in a tree. Breeding starts very soon.
Posted by Divinebunbun at 8:27 PM No comments:

Is It Really Valentine's Day Already?

Here's my favorite passive-aggressive I-don't-love-you-but-I-won't-say-so-because I'm-cowardly-and-want-to-keep-you-on-my-string-as-a-potential-booty-call trick: Don't contact the person at all in the week before Valentine's Day. This squelches raised expectations and prevents being talked or guilted into any Valentine plans. Then, contact late on Valentine's Day when all cards and roses are sold out and reservations anywhere are impossible, saying you're busy with something deeply domestic, and suggest meeting at their place during the week ahead. If the person happens to contact you in the week before Valentine's, do not respond. This also works for other holidays you do not want polluted by the presence of a person known to be lonely and potentially exploitable: Initiate contact only on January 2, or after midday Monday on a long weekend.

For added vicious cruelty, send a wordless crypto-e-Valentine on February 15: for example, a photo of a cute animal.

Congratulations on succeeding at fooling yourself that another human being is not a human being and that you have slyly crawled beneath their radar without their noticing -- without having uttered one single actual lie!
Posted by Divinebunbun at 6:33 PM No comments:

Now I'm Not Complaining, You Understand. . . 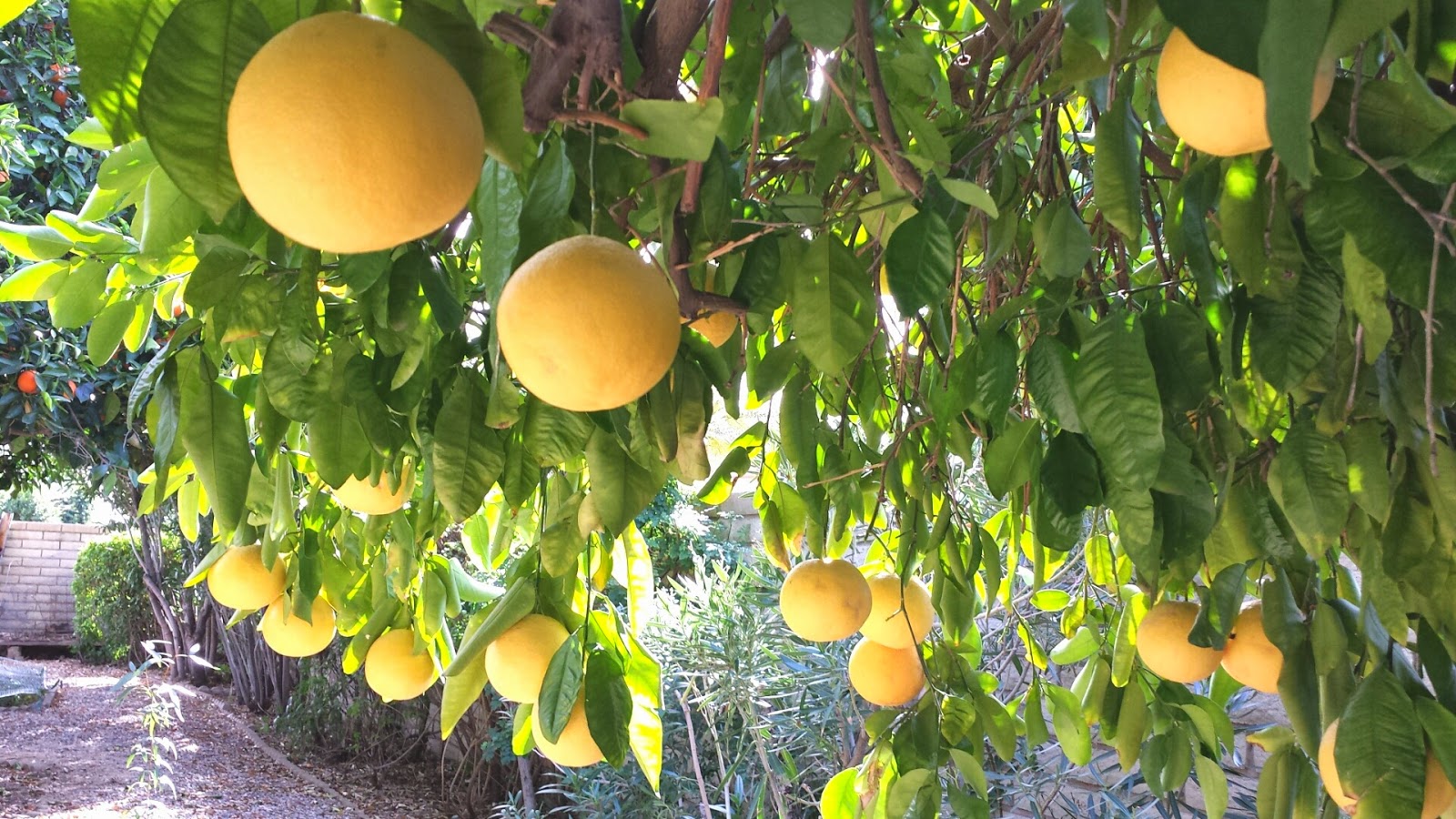 . . .but on my mind right now with Missouri wind-chill in the teens and wintry mix predicted soon, is the grapefruit tree in my parents' Arizona backyard, lovingly tended by my stepfather these last 25 years, and there's no pleasure like going outside in one's pajamas and picking one's breakfast grapefruit from the tree as Adam and Eve did, except maybe the pleasure of having one's 95-year-old stepfather pick some and bring them into the kitchen to save me the trouble.
Posted by Divinebunbun at 2:15 PM No comments: 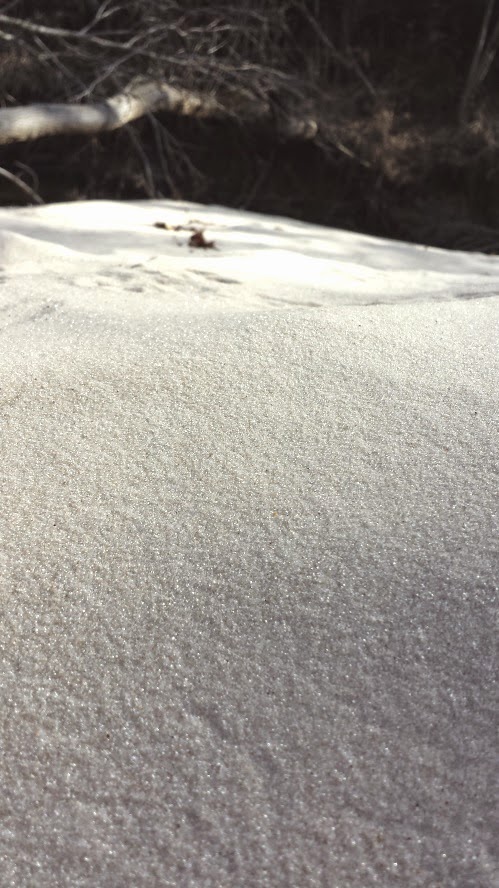 And the object of crossing the creek was to get to this beautiful and secluded LaBarque Creek "beach" and find a perfectly smooth spot and lie there in the sun, in sand so silky it doesn't stick to your clothes. It also makes great quicksand, which I've been caught in only once, in the LaBarque beneath a highway bridge.

Fortunately I'd previously read about quicksand. The impulse is to put all your weight on one leg, hoping to pull the other one out. But instead of helping, that leg sinks deeper, and vice versa. It's impossible to describe the sensation of suction from which you can't free yourself. 1) Don't panic. Areas of quicksand are mostly no bigger than a puddle and no deeper than a knee. In very slow motion -- don't tread or churn, it only makes it worse -- free one leg, and feel around with your foot or hiking pole until you find solid ground so you can -- again, slowly and steadily -- haul the other leg up and out, or 2) if that doesn't work, having tossed aside your backpack, lie back -- and either you will locate solid ground behind you or you will float. Yes, you'll float in quicksand; it's sand suspended in water. Lie back and your legs will eventually float upward. Then use extremely slow and gentle swimming motions to get to solid ground. Better yet, use your hiking pole(s) to test for firmness before stepping in unfamiliar wet sand.
Posted by Divinebunbun at 6:42 PM No comments: 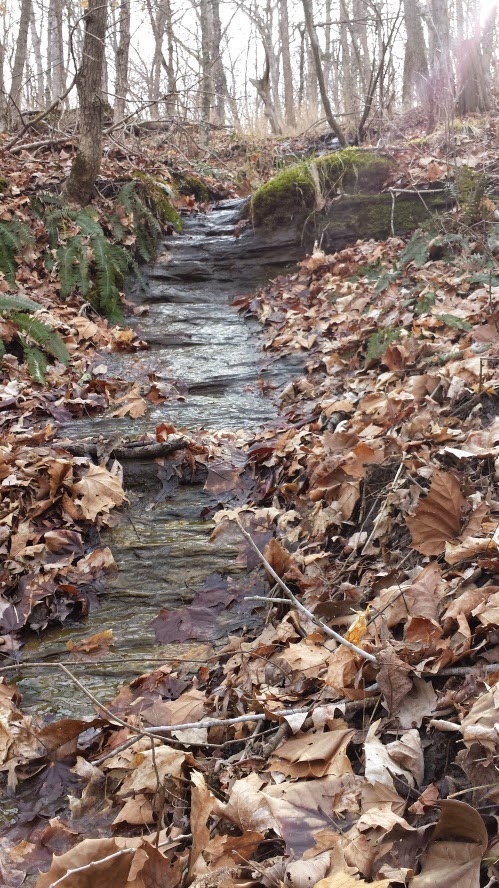 No day is truly rich and full unless you've fallen into a creek that day. In February, especially along the LaBarque, the tangle of underbrush and poison ivy is leafless (although not thorn-less), and I bushwhacked my way into territory unseen, possibly because the creekbed is always changing thanks to floods, weather, beavers, and fallen trees, and discovered on the property's southwestern edge this Waterfall #8. Shortly after taking this photo I crossed the brightly running creek by sitting on a spongy-wet fallen log and inching sideways to the creek's shallowest point, about six inches deep, where the water glittered golden and cold, and dropped myself feet first into the water, trusting my hiking boots and wool socks to keep me warm and mobile until I got back home. Which I did one way or another. Welcome to Waterfall #8. I love waterfalls.
Posted by Divinebunbun at 7:12 PM No comments:

The faith I was raised in, Serbian Orthodox, you probably call Greek Orthodox or Russian Orthodox; they were so designated because back in the 11th century the Eastern Orthodox Church decided to use instead of Latin the local language of the people. We like color, brocade, gold, silver, ikons, incense, candles, stained glass, and lots of faces looking in at us from the next world -- that's what ikons are, windows into the spiritual world -- and that's why their artists fast and pray and paint them only when divinely inspired, and never sign their names. For these reasons we don't do mosaics. 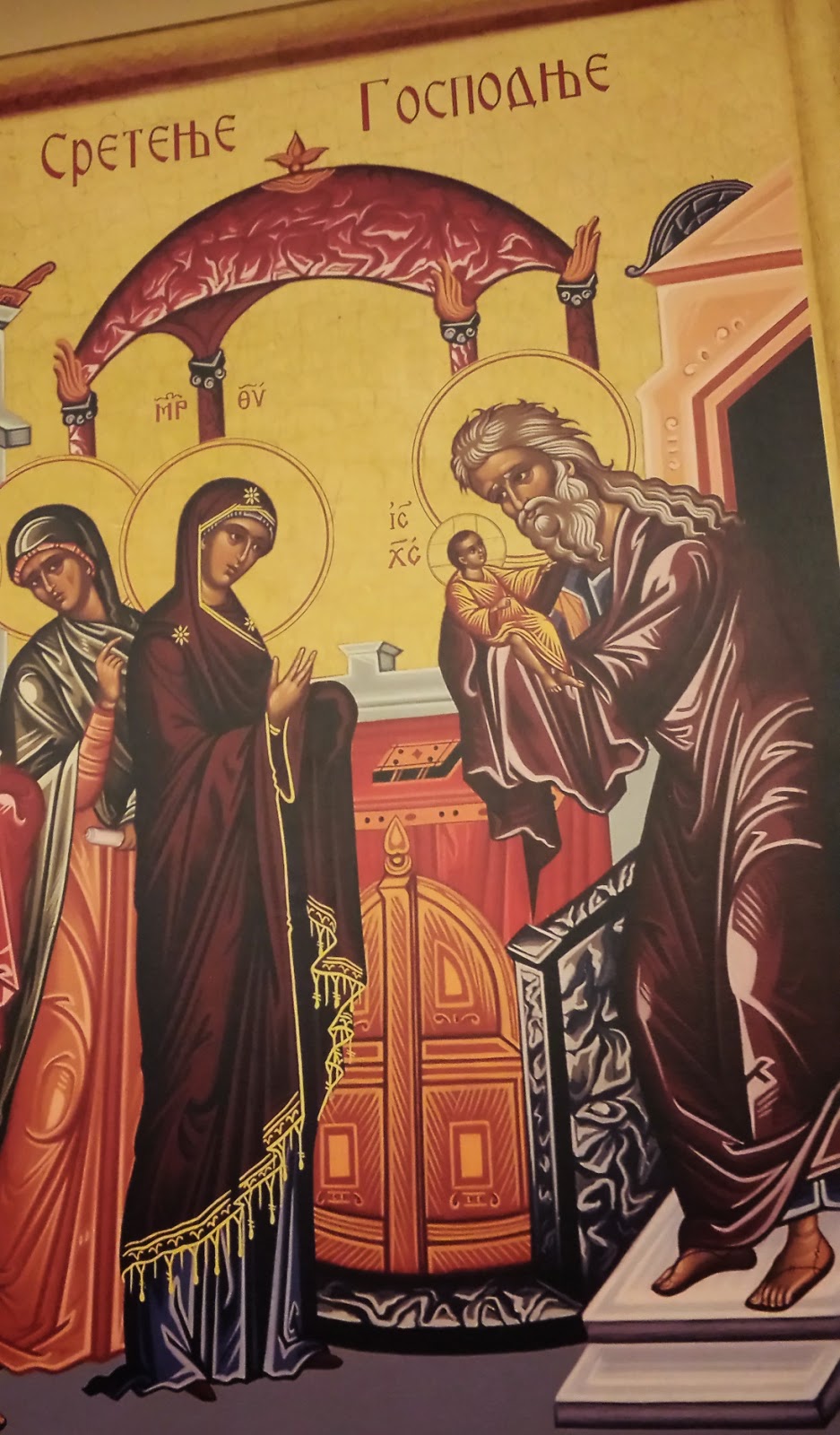 St. Sava Serbian Orthodox Church in Phoenix hired three traditional-style painters from Serbia who worked on the walls and domed ceilings for several weeks at a cost of $130,000 to turn the church into a spiritual experience, and add notes in Cyrillic (and English, where it fit) so you know which of the hundreds of saints you're looking at. The effect is both riotous and harmonious, and the figures, larger-than-life-sized, are detailed down to the toenails; marvelous to see. This is my parents' parish. The liturgy is in Serbian, but the most important prayers and the sermon are repeated in English, for a service lasting two hours, which I spent gazing and marveling at the artwork (see, in the picture at right, the rainbow ring surrounding Jesus). How they made all these scenes and portraits fit, and how they even started to design it, is just about incomprehensible.
Posted by Divinebunbun at 4:20 PM No comments: