The Roberts Cemetery in Robertsville 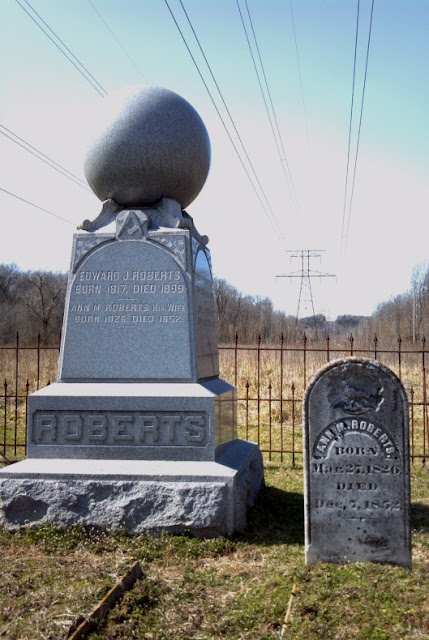 In a corner of Robertsville State Park, at the end of a dirt path, in a clearcut beneath electrical wires, the Roberts family forever rests. This face of the larger monument honors Edward J. (1817-1899) and Ann (1826-1852); another side honors their sons who died at ages 2 and 24. Their son James E. Roberts, remembered on another side, was born in 1852 (the year his mother died) and died in 1886. His wife Mary F. Roberts, born in 1848, was the last Roberts buried here, in 1920.  A few of the graves still have the old-fashioned headstones like the one at right; some have no stones, but their names on engraved at the foot of their graves. The monument with the sphere looks modern but is not new; the side with the two boys' names is weather-worn and close to illegible. A locked Victorian-type iron fence surrounds the little family cemetery, which except for memories is a very lonely place.
Posted by Divinebunbun at 5:28 PM No comments: 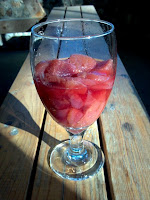 I'd be 'shamed to admit it except I know I'm not the only one finding two-year-old stuff way back in her freezer. Summer of 2010 I'd had excess red plums and not wanting to chuck them, looked up on the Net how to preserve them. I could can them with glass jars and a pressure cooker or "wet pack," freezing fruit slices in sugar syrup. Waste not want not, I said, and did the wet packing, not believing it would work. Fast-forward to opening the container in 2012. Not freezer-burnt. Delicious and sweet. Would be great over ice cream or plain cake. In fact even better than the original plums. When it's time, I am deliberately going to buy too many plums -- for the rest of my life.
Posted by Divinebunbun at 8:16 PM No comments:

All Thingz Must Pass 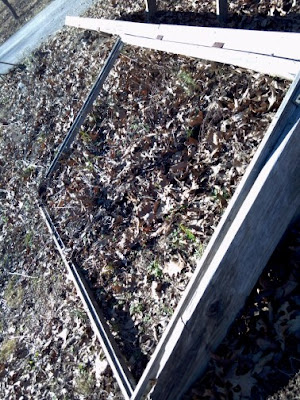 Ten years ago Demetrius built a wooden cold frame for raising greens. Twelve feet long by four feet wide, it had four separate glass lids made out of old windows and hinges. Thanks to this we had lettuce at Christmas. But one day the landlord said "no more gardening," and later Demetrius was gone ("no more gardening" certainly a factor). The untreated wooden frame was so heavy and well braced I couldn't dismantle it except to remove the windows, which had broken, and after a few years I never really saw it anymore, even as it rotted and fell apart and became an eyesore--a Whole Foods version of a car up on blocks in the front yard. Instead of vegetables I planted in the frame native coneflowers, and they thrived in the soil originally mixed for growing organic vegetables. Winters, it filled with oak leaves; good for the soil. Once in a while I'd dig in here get myself some night crawlers for fishing.

Well, recently a truck (Snow plow? Surveyor? Propane truck?) trying to turn in the narrow lane backed into the cold frame, bending the steel braces and crushing and snapping some of the wood, resulting in a genuine eyesore, meaning it's an eyesore to me. So today I picked up hammer and screwdriver and began removing and bagging all braces, hinges, nails and woodscrews so nobody throwing the wood into the firebowl would get hurt and metal wouldn't be fed into the environment (or the lawn mower). Advanced rot helps me pull apart some pieces with bare hands. I got the job half done today and here's what's left. Undoing the work of 10 years ago -- ain't nobody gonna do it for me -- I thought about the summer it was built with such high hopes, and how we couldn't have foreseen what would happen. It felt kind of like washing the body of someone who has died. You wish you didn't have to. But you have to.
Posted by Divinebunbun at 7:48 PM No comments: 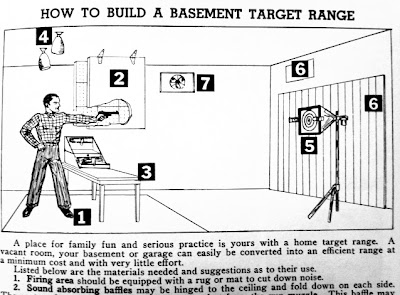 You know how spring gets you thinking about home-improvement projects? How about this rec room makeover for family fun?  Beats a ping-pong table. From The Pistol Shooters Treasury, 2nd edition, 1973. Ahh, the olden days....that looks like a Ruger Mark II in his hand. He can't be shooting larger caliber than a .22 if he's doing it at such short range, one-handed...I can't think of anything more ludicrous or dangerous than a home basement firing range. A figment of somebody's cabin fever.
Posted by Divinebunbun at 11:42 PM 1 comment: 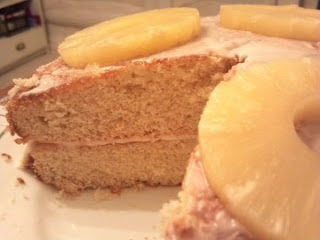 Read about Nikola Tesla's Radiant Energy Capture device, U.S. Patent. No. 685968, and on YouTube saw small ones that work. Just about to go out to Radio Shack for capacitors to build my own Tesla device to generate free electrical power, I decided it was high time I baked a layer cake with my new cake pans, and picked a yella cake recipe out of Betty Crocker's old-old cookbook. You know the one: The ring-binder with all the salt, fat, and sugar that makes everything taste like Mom's. 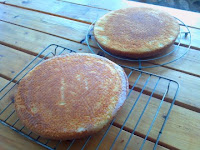 Step 1. Made the layers all right and even used cake flour. It's true that the eggbeater wouldn't work in the batter and I didn't have a mixer so I used an electric hand blender, very unusual, but after baking, the layers seemed okay. 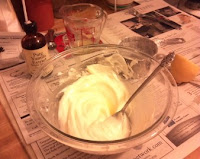 Step 2: Whipped the icing out of powdered sugar and lemon. Easy, and it looked divine! Daydreamed about the people I'd call to come have some cake and coffee. 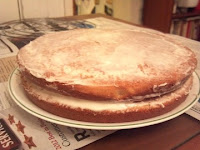 Step 3: In fact I should have made a heck of a lot more Frosting, with butter and cream, and not one cup of the much thinner Icing. Until now I did not know the difference. A thick coat of frosting would have hid what I politely call the cake's "irregularities."

Step 4: Tried to tart up the poor cake by putting pineapple rings on it like my Aunt Elsie did. I laughed and laughed.The layering does not look so bad. But the cake was not tender (did I overbeat?) and the icing too sweet and the whole thing not worth eating, even by a sweet fiend. Final Score: Cake 1, Divine 0. Ah, home cooking. I should have built the Tesla device.
Posted by Divinebunbun at 7:52 PM No comments:

Notes from the Earth 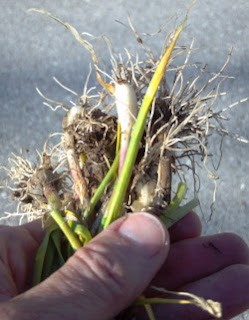 There are times you just gotta love what's wet and sticky. It's so fertile. I like mud because it's the signature of the season. And nothing catches my eye in early-spring mud like some green shoots that lead to some edible roots--spring onions!--underground.  Bending down (oof!), I grab a fistful of green shoots at soil level, and yank (ooo....come on.....oof!) but I've got the motivation. An omelet awaits manifestation. Or a stir fry. The clayish mud gives the onions up with a sucking sound. It's really not time to pick them yet -- try March -- and it's easier to pick spring onions after the soil has dried until it's crumbly, but not so much that the shoots are woody and the bulbs dried out. I rushed the season, but who doesn't want to rush spring? Don't they look like sparklers? The white bulbs remind me somehow of musical notes, if you could gather them in the hand. BTW, the first crocus here was a yellow one, Feb. 17.
Posted by Divinebunbun at 2:16 PM No comments: 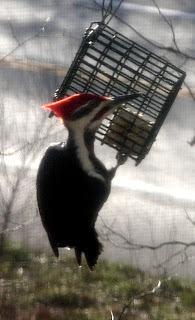 Pileated Woodpeckers live here year-round in the many dead oaks and show up for suet around November 1, disappearing in early spring to nest. While there's good live bugs to fill up on I don't see them again -- although they will call to me if I come out of the house wearing red -- until around August 15 when the parents bring offspring, usually one or two. Mom or Dad leaps smartly onto the suet cage and clings there to eat, and then returns to the tree and feeds the youngun via regurgitation. That's something to see. Then one day the kid nags for food but receives a sharp peck, which means "Get your own," and the younger bird practices making the acrobatic six-foot leap from tree to the suet cage. Pileateds live to about age 12. A couple of generations of these crow-sized birds have hung by their leathery black feet and eaten suet I am happy to give them because food equals love. (And if I cook for you I don't just love you; I'm crazy about you.) In these gray days their fabulous red caps make them my flying Valentines. Both genders have red caps but only males, like this one, also have red "mustaches."

Posted by Divinebunbun at 12:50 PM No comments: 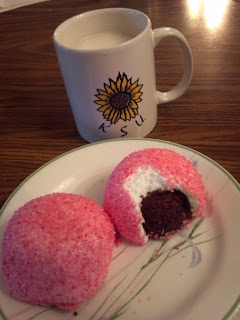 The other day having coffee with a friend I denied myself a pastry from the shop's lovely pastry case and later wondered what kind of person would deny her desire for a pastry when she really wanted one. I decided that was unhealthy. And it awoke in me a desire to live that moment over and choose differently, which gave me the bug for something gooey and sweet. . . So I drove seven miles into town and in the gas-mart's most forbidden aisles where I never go, I in my purple parka shopped among packaged creations spun up from high-fructose corn syrup, white flour, partially hydrogenated oils and artificial flavors -- treats that no Pharaoh or Chinese warlord, no matter how wealthy, ever saw or tasted or imagined. Because I am sensible I allowed only one item. It came down to brown-sugar pop-tarts or Hostess Snowballs, their coconut tops dyed pink for, I think, Valentine's Day. How very festive. I contained myself until I brought them home, and at 4:30 p.m., very civilized, I set them on a plate and had on the side a cup of rice milk in my Kansas State University mug. I think that on one of my birthdays, back in my salad days ("when I was green in judgement") I bought Snowballs and stuck a birthday candle in one. Or maybe I dreamt that. Or it was someone else's birthday. Anyway, please be seated and share this rare and beautiful moment with me.
Posted by Divinebunbun at 8:47 PM 2 comments:

The local paper printed a recent survey from Yahoo Real Estate about what U.S. home buyers want, even in these days "when one in three Americans knows someone who has experienced a foreclosure" (the way one in three Americans "knows someone who had crabs"). The least wanted features today are: gated communities, urban locations, and castle-style homes (!). The most wanted home features are:
I was pleased to see "cottage in the woods" made the list and that one-fifth of all folks wish they could live like me.