And Yes, He Does Get to Punch Somebody 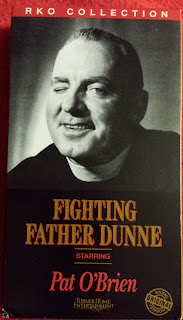 Found a shrink-wrapped video of RKO Pictures’ Fighting Father Dunne (1948)  starring Pat O’Brien, the story of how Father Peter J. Dunne (d. 1939) in the early 1900s founded a home for homeless newsboys and cleverly obtained a building, money, beds, a housekeeper, and a pony to keep it going, by sweet-talking and hiring lots of Irish-born people. It’s a good movie except for its ending, which is probably entirely fictional.

The references to St. Louis locations are correct, and then-Archbishop Glennon is portrayed as having a severe manner but a big heart. The movie indicates that the newspapers were supposed to be caring for their newsboys. But they weren’t. 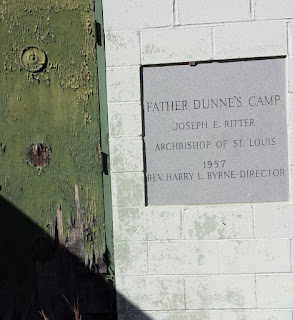 Father Dunne’s Newsboys Home and Protectorate expanded to include a camp. The Archdiocese of St. Louis can tell me only that the camp was established in 1941, the same year the property was acquired, two years after Father Dunne’s death. Boys first came to camp here on August 8, 1941, according to a letter held by the Archdiocese. A dorm was built and dedicated in 1957. The Archdiocese has no further information, nor do they have photos, maps, or other images. But I have some images. 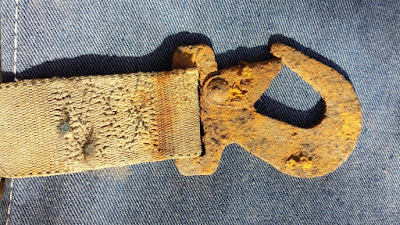 Today I brushed the dirt and moss from the artifacts I took from the dig, and what I thought was a belt made of webbing is not a belt. That is not a belt buckle. It's a flat hook, 1/4" thick and very weighty. This is a flat hook ratchet strap, used for securing cargo. The entire length, from the fraying on its opposite end to the outer edge of the hook, is 32.5 inches. 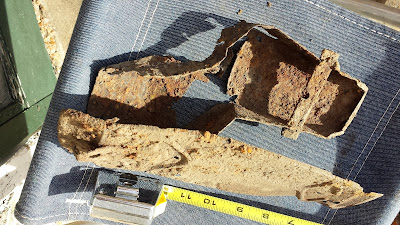 Here is the cleaned "hinge," looking inside it. I am stymied, having very little familiarity with hardware. Could the hollow end have been a latch or something? If you know, please post.

It's just more mystery. I'm waiting for the soil to be diggable again. Patrick has a metal detector which could be a great help. Waiting also for the Archdiocese of St. Louis to send me information about Father Dunne's Camp, and I found and ordered a VHS of the RKO film Fighting Father Dunne (1948) so I can at last see the Father Dunne movie. I'm going to have to refer to this particular Father Peter J. Dunne as Father Dunne (d. 1939), because there are at least two other priests, more recent, with the same name.
Posted by Divinebunbun at 7:24 PM No comments: 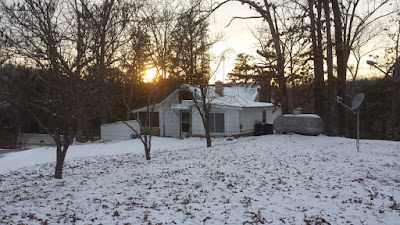 There's a full moon on this my birthday, signifying an exceptionally full and rich year ahead. I already know how busy I'll be, so I'm glad I've got my home all comfortable and familiar, everything stocked and in its place, and a newly-filled propane tank--a recipe for peace of mind. It's easy to write off January as a total waste. But daylight is growing longer (it's no longer pitch-dark at 5:30 p.m.; the sun set at 5:14 p.m. today) and after November and December, I've grown to appreciate more the tricks and pleasures of light. It recently turned colder and this is our only snow of the season so far, about three-quarters of an inch. It's already begun to thaw; when it's thawed, I'll resume digging at my site. Here's a January sunset over a happy and warm Missouri home. I'm older, but only lucky people get older.
Posted by Divinebunbun at 11:02 PM 2 comments:

The Box, the Belt, the Hinge 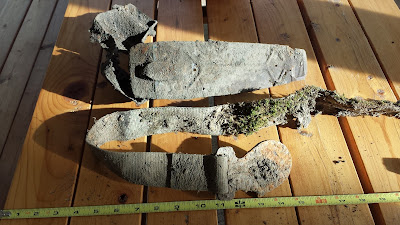 Back today to the site of my mysterious ruin in the woods. Now in 20-degree weather with a dusting of snow, I had a broom and rake to help me uncover and measure the length and width of the ruin so far: 11 feet by 10 feet. Didn't bring a shovel or trowel; today, the soil was damp and my goal was getting the site cleared. I raked up a lid of a small white plastic box which shows damage, as if from heat, along one edge. It's packed full of earth. Then, uprooting and discarding clumps of grass growing between the concrete slabs, I found a woven belt, frozen and plastered with dirt and moss, its buckle well-rusted. (Click the photo to see the items in detail.) 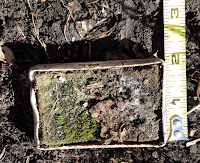 Just as I was about to leave, thinking about the tools required for tomorrow, I noticed sticking up between the slabs a rusty man-made object. Ruining my gloves, I dug around it by hand. Really and truly it was stuck. It had a bend in it that forced me to dig deeper and in a different direction and discover that a tree root had anchored it in place. With all my strength I snapped this root and released the object. It looks like a rusty hinge, but I brought it back to the house to let the damp soil on it dry overnight, so I can clean it with a toothbrush tomorrow and give us all a better idea of what it looks like. I will also clean the belt. One more find in the dampish, nearly frozen earth looked like a finger ring. I hoped it was. But it was a pop-top ring. Those came into use in 1965; whatever happened to this site happened later.

Posted by Divinebunbun at 3:52 PM 3 comments: 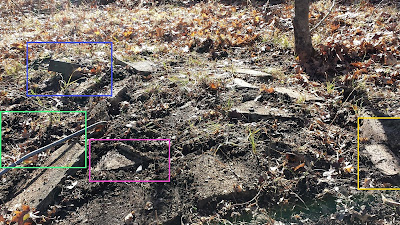 Out for a quick walk in the woods, sleeves rolled up and bare-handed to try to get some sunshine although it's 41 degrees, I find, a little bit out of the way at the woods' edge where I haven't stepped before, a broken slab of concrete. Nobody would carry such a thing into the woods; there are no buildings in these woods. I brush the leaves from it and discover a second slab. Then a third. Then a fourth. Then a fifth. Digging and raking with my bare hands and a stick, I uncover more and more. A structure collapsed here. Then I found a rusty brace of some kind (outlined in blue), partway beneath a slab. Later I find a second one. It's a site. What is this place? What was this structure? 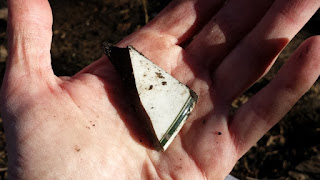 I found there also a steel tube, what I think was part of a gas line (outlined in green), sharply and deliberately bent at one end, exactly like the 50-year-old one at my house that was disconnected and deliberately bent so it could never be used again, when a new one was installed. I find a yellowish brick stamped "St. Louis" (outlined in yellow). Then I find what I think is a remnant of a vertical wall (outlined in pink); this material is different and more brittle, mixed with native stone. I keep raking right there, and just like a real archaeologist I find a shard of pottery; in this case, thick white institutional china, with dark-green stripes. Someone ate here. Was it a barbecue pit? It's too far from the dwellings, and too close to an old-growth tree, and if it had been a barbecue pit it wouldn't have gotten so large -- the site got larger as I uncovered more. I thought of going back for tools, but I'd dug enough for one day. Tomorrow I'll bring tools and a measuring tape and try to uncover the extent and solve the mystery. 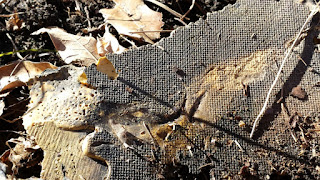 There was also some synthetic material, very deteriorated and hardened (melted/burned?), and I'm showing a photo in case someone knows what it is--perhaps a form of insulation?

There was a boys' camp on this property, and I've heard tell of a chapel that existed pre-1957, when the dorms (now ruined, and a quarter mile away) were built. Could this be it? It does not appear in aerial views taken in 1954.

Posted by Divinebunbun at 4:18 PM 4 comments: 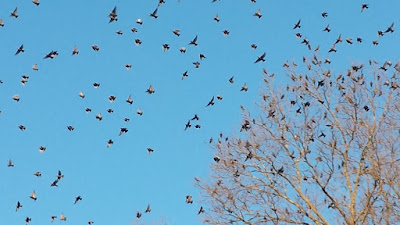 No one knows why birds flock, not even Smithsonian magazine. The scientists simply haven't figured it out yet, although they think it's done for the group's safety while traveling, the same reason fish swim in schools. Coming up the driveway from yesterday's walk, I beheld in the crown of one of the twin oaks a mass of robins, all perched and cheeping to beat the band. Yes, robins flock; look at the photo closely and you can see a red breast or two. I stood there and watched and listened and photographed until finally they got up en masse and flew away toward the northwest. Perhaps they think our bizarre sunny 60-degree weather is springtime, and they're headed home, where they don't flock but break up into individuals and families. I don't see a lot of robins on this property except during migrations; there's not enough shorn green grass for them to hunt in. Robins are more common in the city, where they nest in windowsills and outdoor light fixtures, and lay blue eggs, each a masterpiece.
Posted by Divinebunbun at 2:10 PM 1 comment: 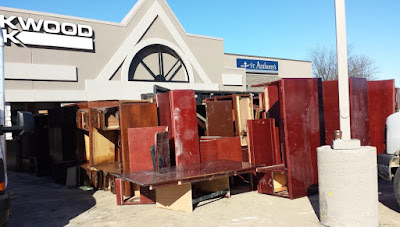 Parts of Eureka, Mo. flooded that never had before; Central Avenue in Old Town Eureka got dunked in 3 to 4 feet of water -- enough so that camera crews floated down the street. On the other side, facing Highway 109, and across from the post office, is a strip mall that includes an Ace Hardware, a jeweler, a weapons dealer, Rockwood Bank, and a St. Anthony's health-care office that was formerly my Medicine Shoppe #1390, sold to Walgreens but not forgotten. The saving grace was that nobody was hurt. The water quickly receded, and yesterday, a bright sunny day that belied all that had happened, I was on the strip-mall parking lot watching as workers emptied the bank of its ruined bank-type wooden desks and furniture, tore out the carpeting, and so on.
Posted by Divinebunbun at 12:47 PM No comments: