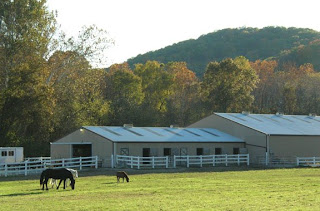 Dear Reader: I took this today, down the road a ways. Thought of you, and wished you were here. Love, Divinebunbun.
Posted by Divinebunbun at 7:34 PM 2 comments: 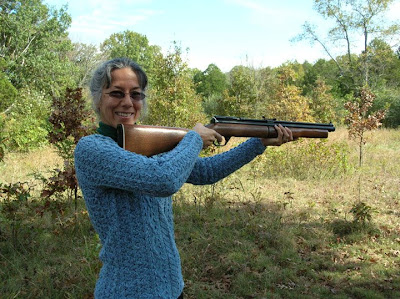 Yesterday a friend and I walked a trail through Lone Elk Park where elk run free, and she saw, across a lake, a couple hundred yards away, two male elks tangling their antlers, pushing and shoving . . . I said, "Wow. How did you see that?" and she told me that a gym teacher once called her Hawkeye.

Encouraged, when we went back to my place I got out my Benjamin-Sheridan air rifle that I use for fun and squirrels. On the shooting range I set up in my meadow I taught Hawkeye -- who was born in New York City and had never touched a gun -- to shoot, first at coffee cans. On her fourth-ever shot she hit the target, and kept on hitting with jaw-dropping accuracy; a real natural talent. I said, "This calls for a celebration," and got out my Osama Bin Laden paper target, downloaded from a site called Ty's Shooting Interests, which I use only on special occasions. Hawkeye got a bull's eye on her second shot. I gave her the target as a souvenir to take back home to the big city.
Posted by Divinebunbun at 9:31 PM No comments: 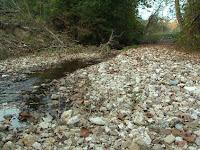 The bed of the mighty LaBarque Creek is a motherlode of fossils and a rockhound's Eden. The rocks are a perfect Chex Mix of limestone, sandstone, shale, chert (som 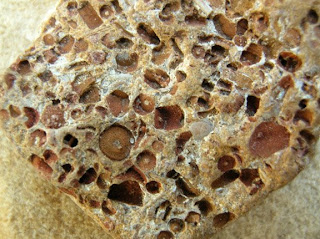 etimes resembles arrowheads!), dolomite, hunks of iron, hardened clay, and marble. I find that the rocks with fossils are almost always turned fossil side up. Most fossils here are those of ancient marine plants, both simple and leafy, and simple animals, sort of like coral, called crinoids. My guess is that what you see in the close-up photo is crinoids. I don't know how or why I sleep when there is such cool stuff not 200 feet from my door.

Posted by Divinebunbun at 7:07 PM No comments:

She Loves Him Not

A followup to the previous entry. Shelley made Sammy take down the whole display and take the pieces away in his truck. This morning I walked down there and it was vanished except for a few straws on the ground. Wish I'd been a fly on the wall for that conversation.

Floridaboy commented on previous entry that the display looked like an altar -- and I agree with him!
Posted by Divinebunbun at 3:14 PM No comments:

Ya Think He Kinda Likes Her? 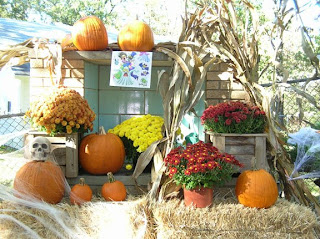 Neighbor Shelley's suitor has been courting her for over a year. She pays him no mind. So Sammy gifts her with all sorts of artistic creative floral arrangements he builds and leaves at the gate of her driveway. Once he gave me a wonderful hanging plant that he had extra. Shelley lets the stuff rot right where Sammy left it. It's such downright odd behavior that I think Sammy might be her ex.

Sammy stops in front of my house if he sees me workin outside, and is polite, and asks me if I've seen Shelley, and where she might be these days.

This morning I saw a van come and go, and later I saw that Sammy had outdid hisself on this Halloween display. He brought in bales of straw, mums and pumpkins, the cornshocks and skull, the cobwebs he draped over the arrangement and the bushes. If I were her I'd at least give the man the time of day.
Posted by Divinebunbun at 10:29 PM 2 comments:

Hen of the Woods 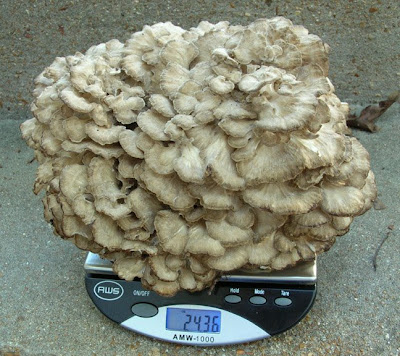 At the base of an oak tree, far into the woods, I found this "choice"-grade edible mushroom, Hen of the Woods (Grifola frondosa), my first ever. Was I thrilled! Recognized it at once from studying fungi manuals. Got the scale and weighed it in at 24+ ounces. Beautiful.
Posted by Divinebunbun at 4:21 PM 1 comment:

Drama on the Kitchen Floor 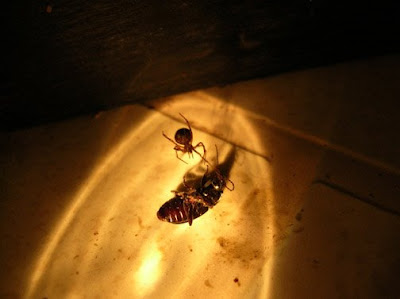 The occasional roach comes out of the drain here, but this morning I watched one of 'em get trapped-and-wrapped by a hungry spider, deep in a corner of the kitchen where I don't clean much. The drama went: Spider saw the roach, dropped down and stung or bit it so that the roach flipped on its back. Spider climbed on up, dropped down again and strung up the roach so it was suspended in the air, and then spun it, roping it tightly round the middle with filament. She lowered her prey to the floor after it was all tied up. The photo shows her putting on the finishing touches. The roach expired shortly afterward, and the spider had breakfast.
Posted by Divinebunbun at 8:43 AM No comments: