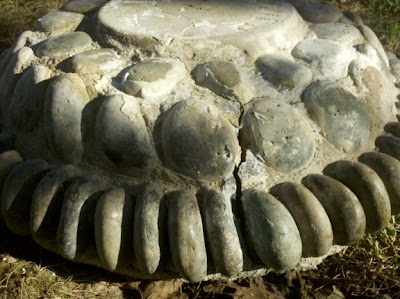 Tried to fix it, but most anyone could tell you that this concrete birdbath bowl, much loved but now 10 years old, and been outdoors all that time, is too far gone to save. That didn't stop me, though, from buying a tube of silicone and loading it up in a caulking gun, and somehow not piercing the foil inside the nozzle, and then squeezing the caulking gun harder and harder and getting nothing out of it, then realizing I'd broken open not the pointed end but the bottom of the tube, and a full load of silicone goop was coating and hardening inside the caulking gun chamber.

Realizing I had a narrow window in which to salvage my pride and any claim I have to intelligence, I grabbed craft sticks and smeared the silicone into the cracks in the birdbath. Mess City. Tried valiantly to remove the tube from my orange caulking gun, which was the gift of a former boyfriend who never bought me anything else, may he burn in hellfire for eternity, but it was also too far gone. Got a garbage bag so nobody would ever see it (too embarrassed to take a photo) and wrapped up the tube and caulking gun now stuck together forever, unlike me and the former boyfriend. The one nice thing about trash is most of the time nobody will be able to tell whose it is.

I'd have been better off using duct tape....
Posted by Divinebunbun at 9:46 PM No comments:

Email ThisBlogThis!Share to TwitterShare to FacebookShare to Pinterest
Labels: bird, birdbath, concrete, do it for me, do it yourself, home repair, repair

How to Burn Bagworms

1. Get a pole, then rip and bat these horrible huge translucent sticky bags, each full of a thousand squirming baby bagworms, out of any tree you can reach. I got three big bags that were skeletonizing the leaves on my hickory tree. If I'd left 'em, the worms would crawl out, be adult in a couple of days, turn to moths and reproduce, and next year my proud tree, which shades the Divine cabin and provides genuine Missouri hickory nuts for wildlife, would be sicker.

2. Lay the bags side by side and wrap in newspaper. Don't wrap too tightly because then the bags won't burn. In addition to being gluey as spiderwebbing times three, they're also somewhat fire resistant.

3. Set newspaper on fire. Dance insanely around it while it burns.

4. (Not pictured.) Make sure no bagworms have survived. If they have, wrap them up in more newspaper and set it on fire. Bleeding hearts, please know that plenty of  bagworms in torso-sized bags are in all sorts of trees way up beyond my reach. Yet I think of Mahatma Gandhi's advice: "Anything you do will be insignificant, but it is very important that you do it."

Posted by Divinebunbun at 9:15 AM No comments:

The Colors of Things To Come 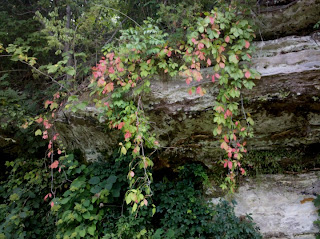 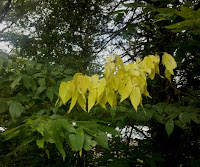 Last night the local TV weatherman gave his "next three months" forecast: It'll be dry as dust, will frost in October and, he actually said this twice, might snow before the end of that month. November the pits also. But I knew anyway that when August comes the party of summer is pretty much over. "August is a September month," poet Sylvia Plath wrote in her diary. She preferred July. I prefer June. May is better. Anyway, can't do anything about it except admire the previews of fall colors I currently see here and there among the jungly greenery. The cliff is typical geology for this area.
Posted by Divinebunbun at 9:11 PM No comments: 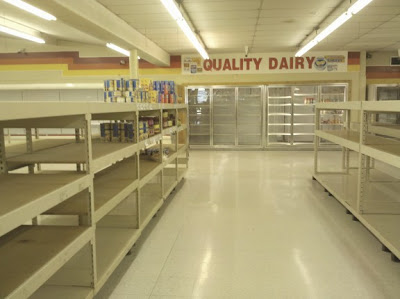 Sav-A-Lot became the Eureka Market this past year, but a few weeks ago it shocked me with a message in stark black Magic Marker on the door: "DUE TO THE ECONOMY THIS STORE IS CLOSING." It is now its final week, has emptied all but about 10 percent of its normal stock and is selling it all cheap. I have shopped there -- not as my primary store but as a reliable source of canned beans and tomatoes, and real corn tortillas -- since 1999, by my reckoning about 200 times. This store has anchored this particular strip mall since 1966.

Its parking lot had cars so I went in there today, surveyed the shelves, got a cart and loaded it to the top with the last of the: pitted kalamata olives, spicy mustard, balsamic vinegar (that item never sold very well), canned tomatoes, canned artichoke hearts at half the normal price, green Tobasco, Progresso chicken-sausage gumbo for when I don't make my own, black walnuts, tiny canned shrimp, tissues, birdseed, heavy-duty foil, boxes of Jello and so on, perhaps 100 pounds of groceries, to the tune of $83, about one-third to one-half of what I would have paid for it in a normal store. Remaining is a lot of bagged candy, cake mix and canned ravioli, and sunglasses 2 for $1; but no bread, meat, milk or produce. If the boxes were mouseproof I'd have bought more cereal. The bad economy has taken so much from so many, me included. I took advantage to stock up for harder times.

I should have known this was coming when I went in needing bleach, found none, and was told "it would be in tomorrow," and when the store cut its hours and its staff (soon to be jobless), but like any death it's always a shock, and it was truly like a funeral in there today.
Posted by Divinebunbun at 6:46 PM No comments: 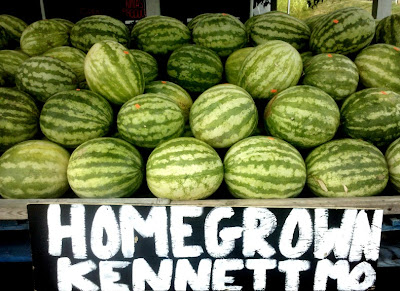 Was a watermelon farmer from Kennett, MO, whose crop got ripe and every day he found a big fat juicy melon missing from his garden. He put up a sign that said "Warning: One of the Watermelons in This Patch is Poisoned!" and figured that would fix the thief. Farmer the next day came out and found his sign had been scribbled on and changed to say, "Two of the Watermelons in This Patch Are Poisoned!"
Posted by Divinebunbun at 10:06 PM No comments:

How About A Nice Plate of Hashbrowns? 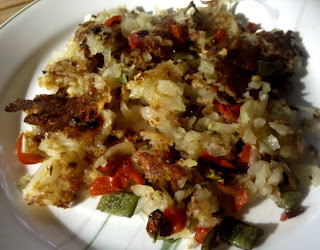 Mine is a small household needing nothing but a knife and cutting board to fix vegetables, but when recipes like Zucchini Bread say "Shred 2 cups zucchini," I am less willing than before to take the time with a hand grater and to shred my knuckles, or to "chop finely" things like apples or mushrooms. (Life's too short.) Yet for the zucchini bread or potato pancakes or carrot-parsnip patties (them's good eatin'), nothing but shredding will do. Maybe you've noticed that cookbooks and recipes, more and more often, say "Put this in the food processor and process for one minute," and I started to think I should get one. 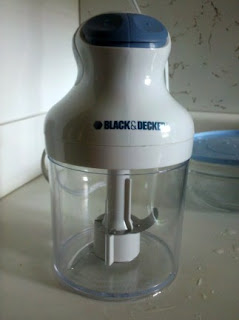 Food processors have always looked to me like nuclear power plants or what a chemical refinery might look like if made of high-impact plastic; slightly creepy. Went to all sorts of sites, read reviews, knowing this was a once-in-lifetime purchase. I didn't need the $200 11-cup processor but its bowl was less fragile than the same maker's $170 7-cup, and the other maker's 3-cup size leaked and for all of them people hated handwashing the parts and buying accessories. Others declared them all junk unless made in France. And where would I put the ungainly thing? I even got rid of my coffeemaker to get more counter space.

Then I found scores of rave reviews for this Black and Decker 2-cup chopper for $22. It has exactly three parts: the bowl, the whirling two-winged blade, and the 2-speed motor on top. So I ordered one. That first day I pulverized Parmesan and chopped carrots with it and then I baked an eggplant and made babaganoush in a twinkling, and now I make hashbrowns like I haven't in years. The chore of shredding gets done in no time and I can start cooking. I don't normally recommend material items, but if your needs are small and your hands are stiff or you're just too busy to chop up onions or the jalapenos for the salsa, this is the thing to get.
Posted by Divinebunbun at 1:59 PM 1 comment: 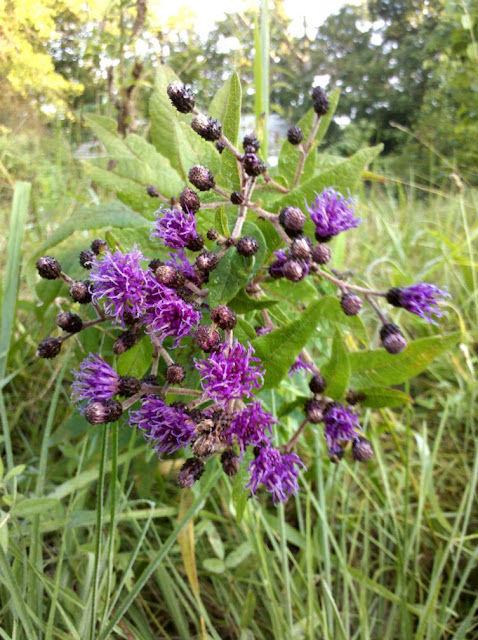 This is the only Prairie Ironweed (Vernonia fasciculata) in the meadow. Vernonia  is the aster/daisy family, and Vernonias can be found all over the world. There's a kind that grows 7 feet tall but this isn't it; it's only about 2.5 feet high. Wikipedia says all Vernonias "have the same effective properties as a blood purifier and uterus toner, containing sesquiterpene lactone,which helps also to prevent atherosclerosis." I am therefore honored to have this native perennial in the meadow. Those dark little bud nubs are what caught my eye; they look like blackberries.
Posted by Divinebunbun at 12:38 PM No comments:

Smiles on a Summer Night 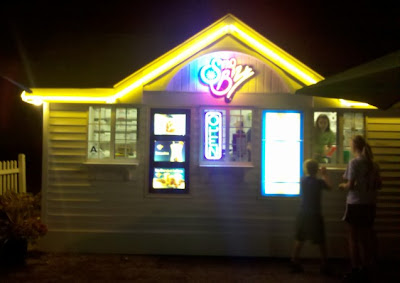 The July just past was the fourth-hottest July on record in this area, and the hottest since 1936, and August is the same, and this is God's way of telling the people of Missouri to enjoy the hot darkness and slurp up icy things before bedtime. There's something wonderful about neon lights in August advertising icy stuff. The SnoBiz stand, a tiny six feet wide and 12 feet long, is shuttered all winter behind the grocery store and so nondescript I don't even see it, but it comes alive with fun lights and people on summer nights, and finally -- because life is too short to be such a hardass as to lecture myself, "I don't need sweet icy stuff on an August night" -- stopped in about 10 p.m. when it was still 85 degrees, and bought a lemon-meringue ice (a staff recommendation) just so I could take a photo.

It was incredibly tasty for a cup of shaved ice and placated my inner seven-year old who vowed that after she got her own purse and money and could stay up past 8:30 she wouldn't ever pass up an ice cream store, ice-cream truck, ice-cream sandwich, slurpee, or sno-cone. (Wasn't any frozen yogurt in those days. In Harvard Square, in Cambridge, Mass., is a plaque honoring the place that the first frozen yogurt was made and sold in 1971.)
Posted by Divinebunbun at 10:00 PM No comments:

Everything's Good This Time of Year 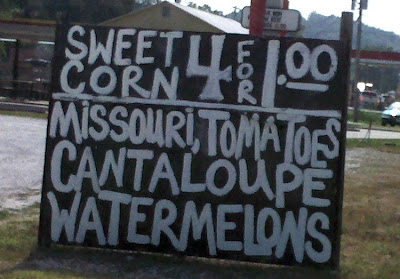 Please stop in at your local farmer's market or fruit and vegetable stand because this time of year you cannot go wrong. If it grows in your locale, it's at its peak. So what if it's 100 degrees

. I sorted through the Missouri tomatoes for the squat-looking Big Beefs and Brandywines, boug

ht the sweetest local corn (had it for lunch along with my own baked steak fries; now that's divine) and local nectarines, a local eggplant with such lovely purple cheeks I want to kiss it, some zucchini and green beans, and I admired the plums, famously sweet Vidalia onions ("You only cry when they are gone"), brand-new baby potatoes both red and Yukon, and the avalanche of melons.

Andy's is in House Springs, also called House Sprangs, and operates 11 hours a day in summer, like many such businesses. I asked the beautiful lady who waited on me (pictured) if she was the owner. She said she was the Owner's Wof.

This is my idea of heaven.
Posted by Divinebunbun at 5:21 AM No comments: