Tips for the New Recession

I'm told the United States stock market has hit the skids and we're facing a recession as bad or worse than that of 2008, an ugly one around here, with shuttered businesses and gasoline at over $4 a gallon and city people dumping their pets here and country people poaching deer and echinacea roots, and meth labs in the woods.

Times were lean but I made it through. Just today I began listing what I'd do to survive this next one:

Posted by Divinebunbun at 7:26 PM No comments: 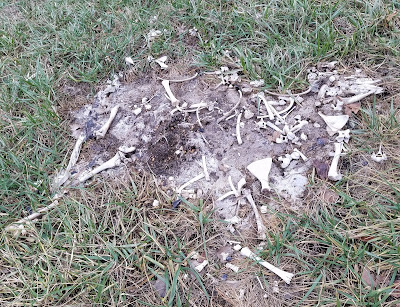 Like several other deer around here, this one got hit by a car just before hunting season opened in November and lay dead on the road shoulder about 200 feet down the highway. This past season Franklin County, just inches to our west (I can throw a stone over the county line), had the biggest deer harvest in the state of Missouri: more than 4,000. Sorry, Bambi fans: The herd needed thinning. Worse than seeing a deer in the road shoulder is seeing half a deer.  That's to say nothing of the people in the car. Before you get all Awww about deer hunting, imagine your own car hitting a deer that rolls at 50 mph through your windshield onto you and your passengers.

Three, four, five days and I began to wonder: Who picks up the roadkill in Missouri?

They do it on call, but I didn't know that then. When scavenger birds picked at the carcass I looked the other way. Then I got all involved in whatnot and left town for a week. Came back and catching up on work barely left the Divine Cabin for a week to ten days. Then going for a walk I see this. Looks like a young deer (they're the most fearless and ignorant) who was broadsided.
Posted by Divinebunbun at 6:34 PM No comments: 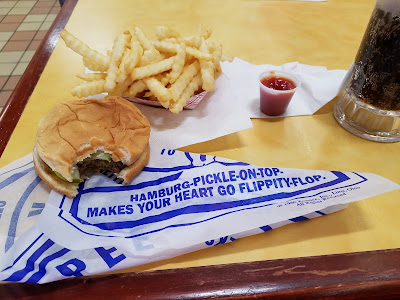 At Kewpee's Lunch, the burger place opened in 1939 in my hometown and one of the town's main attractions, the burgers with pickle-on-top are excellent, they make their own root beer, and please do leave room for the classic finger-sized French fries. (Who am I kidding? I eat the fries first!) One wall is glass cabinets loaded with every permutation of Kewpie dolls: plastic, rubber, ceramic, and paper dolls, and memorabilia.

I learned that Kewpies were created by the first successful female cartoonist, Rose O'Neill, born in 1874 and brought up in Nebraska and later a resident of southern Missouri -- and in between, she lived in New York selling her drawings to Ladies Home Journal, Puck and all sorts of magazines. Merchants wanted her Kewpies in their advertising; Germany manufactured the original bisque Kewpie dolls. Not liking the doll prototypes, O'Neill went to Germany, smashed the molds, and made the manufacturer do it over. O'Neill became the world's richest female illustrator -- all because she saw Kewpies in a dream: little cherubs with no meanness in them who brought sweetness and light, unlike their progenitor, Cupid, who shot arrows into incompatible hearts for sadistic fun.

Did my heart go flippity-flop over lunch? You betcha. The original owner of Kewpee's died in 1956 -- of a heart attack. So says his obituary. No surprise there. For many years, while I was growing up, Kewpee's was the only restaurant in all of downtown.
Posted by Divinebunbun at 10:30 PM No comments: