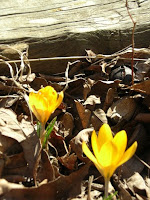 As usual, a surprise -- the best surprise in the world. Another spring! Heralded by my favorite flower! Thank you, world, for this gift. Just when our hearts need it most.
Posted by Divinebunbun at 3:09 PM 4 comments: 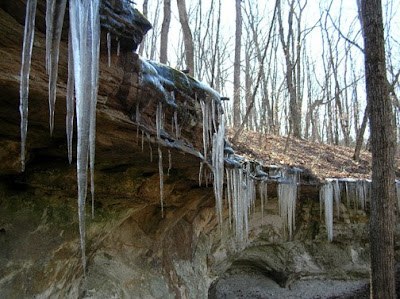 Waterfall #5, a drop of about 20 feet, is its most dramatic when the water's frozen, as it was today. Last in the Waterfall Photo series.
Posted by Divinebunbun at 4:55 PM No comments:

Soaks Up 47 Times Its Weight in Excess Reality

When God closes one door, He closes another, too, just to show us who is boss. Life events were such that I took a day off from work and hung out with Hawkeye, also recently and repeatedly traumatized. We had lunch at Captain D's and I was able to eat a meal for the first time in days. Too nippy to hike so we did the Dollar Store. Bought myself a Dodge Ram cap plus a bag of marshmallows.

At my place Hawkeye, using my tools, all by herself restrung her daughter's favorite bracelet, sadly broken more than a year ago -- and now daughter'll get cheered up when she receives it in the mail. We talked about what the Universe wants, and how it ain't what we want, and how, in this vale of tears, we got to have faith. Then we had soup and bagels and chocolate-covered almonds and blew up some fireworks. We succeeded in cheering up to a good extent. I recommend this Rx to anyone suffering from too much winter.
Posted by Divinebunbun at 6:40 PM No comments: 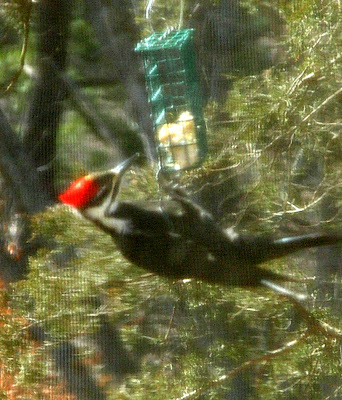 Lady Pileated Woodpecker now takes her daily brunch at my suet cake. An honor to have her, after several months without seeing her. She winters here but did not dine here. Yet she did "call" me from the treetops every day. Lord Woodpecker must be nearby. Photographed this through the screen because it'll be a while before I can slowly regain the confidence of Her Ladyship, get closer, and photograph her without barriers between us. She has an enviable cap and great feet.
Posted by Divinebunbun at 1:10 PM 1 comment: 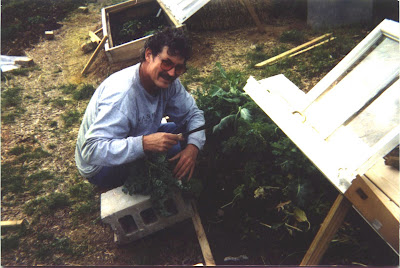 A brilliant and strictly principled organic gardener, Demetrius was talented with all plants and devoted to vegetables. He dug a pit 25 feet by 25 out of hard clay and filled it with soil and it became his garden. He grew exquisite tomatoes, beans, zucchini, Charentais cantaloupes, pattypan squash, lettuces, and red potatoes; also onions, garlic, turnips and -- pictured, he's harvesting -- kale. Fresh kale grew deep into the the winter in the hotbeds he built. When he saw his first tomato seedlings every April, you would have thought he was a new father admiring his babies.

Demetrius used to lecture and chide the bunnies who were calmly and in plain sight chomping on his vegetables. The bunnies didn't listen, although he had important stuff to say. So he planted white clover between the vegetable rows, and it worked; the bunnies ate the clover and left the rest alone. But we never did figure out how to keep the turtles from eating the cantaloupes. He loved the seasons and solstices and bees and cycles of life and often remarked on the natural world: "The design is perfect."

He always tried to get a position as a gardener but his true love was farming. The tomatoes on the plate I'm holding in my own photo are the fruits of his labor. Goodbye, friend since 1997; a difficult and sometimes tortured man, Demetrius. He took that name because it means "priest of Demeter" and a gardener is a priest of the earth.
Posted by Divinebunbun at 9:42 AM 1 comment: 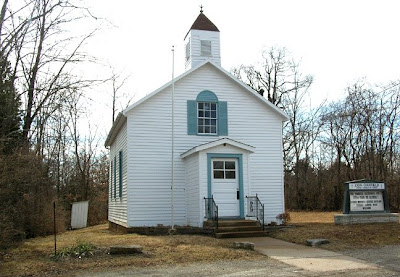 I like country churches. This one dedicated in 1879. Note the outhouse at left. Quaint. Church located near what was once Glencoe, Missouri. Unincorporated Glencoe was absorbed by the town of Wildwood.
Posted by Divinebunbun at 1:48 PM 2 comments:

Signs of Spring This Week

1. Goldfinches molting, turning from olive and gray to bright Easter yellow.
2. Today (Feb. 6), the year's first cardinal whistling/mating song.
3. Today the blue jay calling in the treetops -- sounds like dice rattling in a cup. I bet he was looking for a mate as well.
4. Bunnies suddenly appearing from their magical nowhere.
5. Buds on trees, but especially on the dogwoods.
Posted by Divinebunbun at 1:28 PM No comments: