Hugely surprised, on the carpet in front of my non-working fireplace with its vents all taped up to keep creatures from crawling in and out, this is what I saw and what I did:

And when I played back the video I saw only then that I had injured it and that it bled red, and I wept, very sorry I had added to its suffering. It's a Ring-Necked Prairie Snake (Diadophus punctatus arnyi Kennicott). 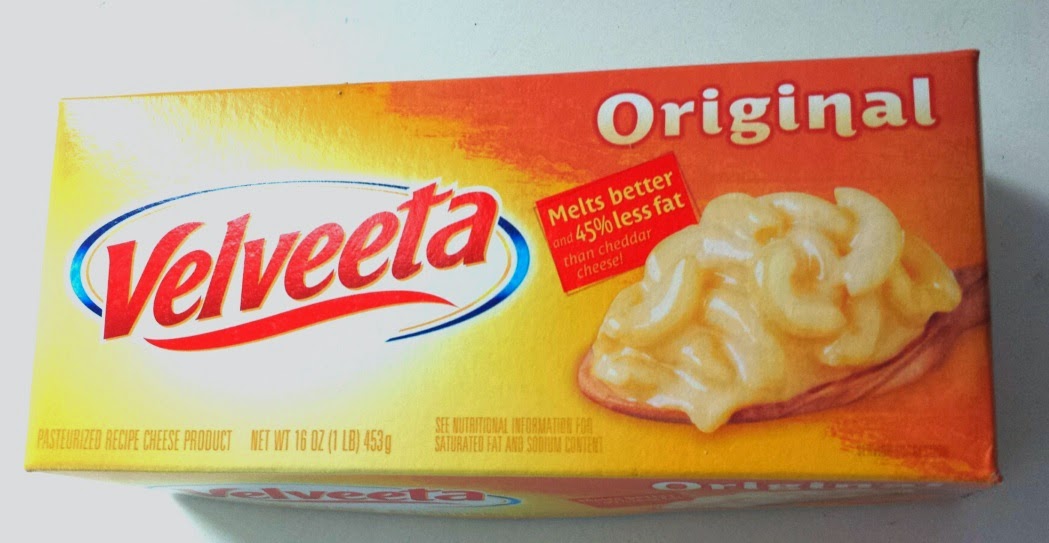 I like an aged and sharp cheddar cheese as well as anyone, maybe more so because I'm from Wisconsin, but I would rather live in Missouri and eat Velveeta than live in Wisconsin and eat cheddar. Velveeta Cheese Product attracts me because:

1. It's good enough to eat but not good enough to snack on.
2. I can eat 55 percent more of it because it's got only 45 percent of cheddar's fat.
3. It melts wonderfully into my baked sweet potato.
4. It's cheaper, although not that cheap: one pound, about $5; two pounds for $7.
5. Dry out and whiten around the edges it will, but even when forgotten in the fridge for months it won't turn blue or totally gooey brown, and it will never smell.
6. Kids will eat it, as will many Midwestern adults.
7. Velveeta actually used this slogan: "It'll Get Eaten."And it does get eaten when there's nothing else to eat.
8. The ingredients aren't that bad: milk, whey, skim milk, milk protein concentrate, whey protein concentrate, sodium phosphate, modified food starch; and 2 percent or less of salt, calcium phosphate, corn syrup, canola oil, maltodextrin, lactic acid, sorbic acid, sodium alginate, sodium citrate, cheese culture, enzymes, apocarotenal, and annatto (for color).

Get the original. Don't bother with "reduced-fat" Velveeta; it doesn't melt well and lacks that nice synthetic flat-paint American-cheese flavor.

Posted by Divinebunbun at 7:50 PM No comments: 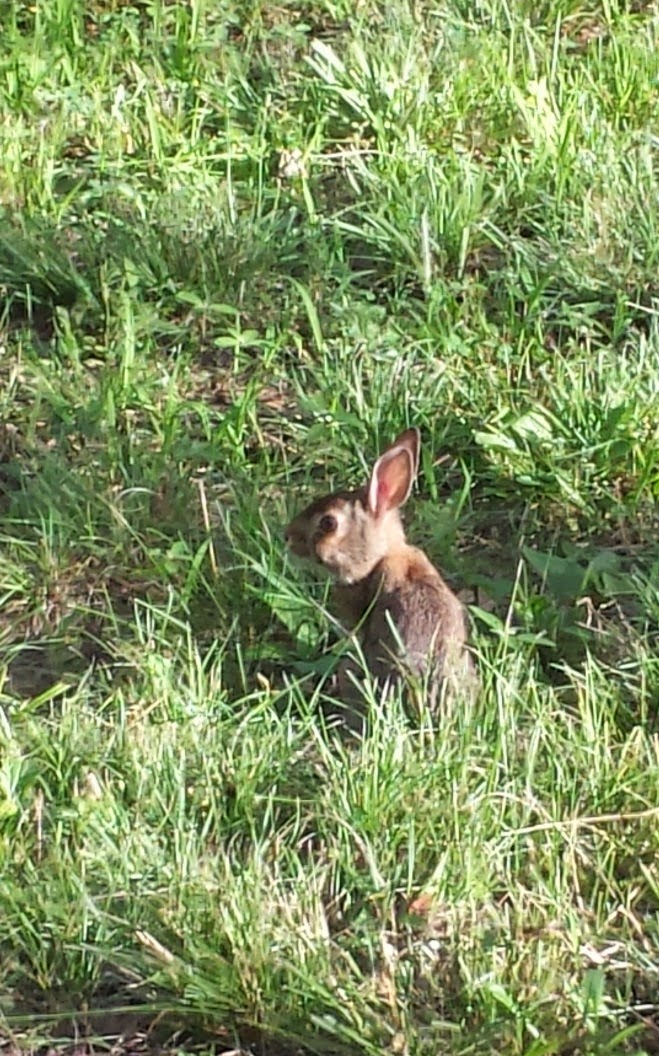 Have you noticed more bunnies in the area this year? For many summers the population on this land has been scanty and I blamed coyotes, feral cats, loose dogs, and drought, but this year they're hopping around the yard and meadow, drinking dew and thoughtfully chewing grass and having bunny children (see photo) who, when very small, frantically run in hilarious circles when a human appears. Right now there's an adult bunny outside in the yard in front of me, ears up, alert. Now's she's dining. I love them.

I have heard several reports of "bunny population explosion" this calendar year, here and in the city where one winter evening I and a friend watched from her window as two bunnies played leapfrog in the snow. They actually did! For half an hour! It looked like bunny fun. I haven't yet heard of or found an explanation for the increase, but it might well be this summer's optimal weather conditions: fairly mild and plenty of rain.
Posted by Divinebunbun at 8:19 AM No comments:

If You Have Good Neighbors. . . 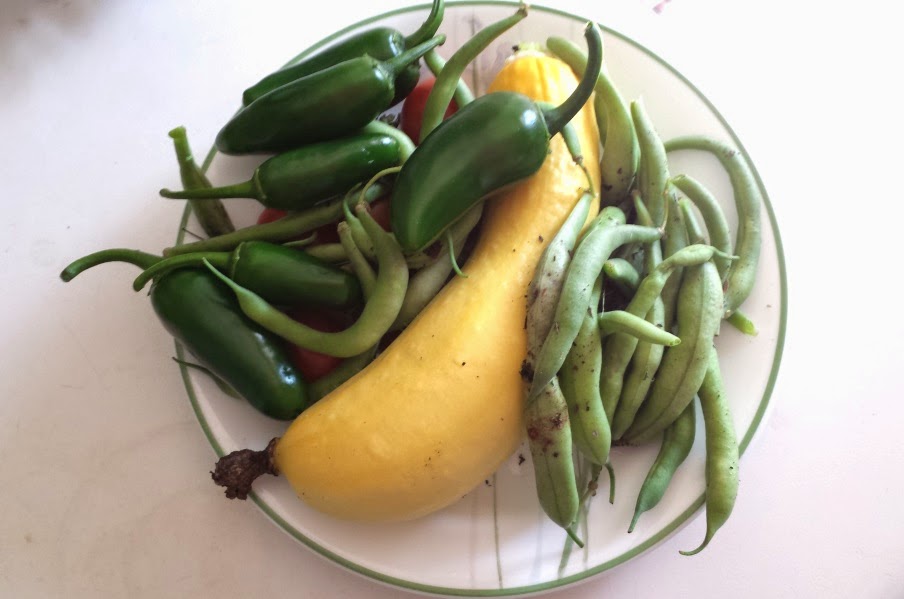 1. This is what you'll get from the neighbor's garden in mid-July: the first fruits, the beautiful overflow. I ate all the little grape tomoatoes that were on the plate before thinking to take the photo! Also, Patrick delivers eggs fresh from his hens. Between these and the pounds of chanterelles (what an astounding crop this year!) in my own woods, and my own hickory tree's nuts from the autumn I hardly have to buy groceries at all.

2. A large pickup truck turning around in my yard accidentally crushed my second Earth box with turnips and arugula in it, so in the remaining box I am growing only basil. The shaken truck driver ("What have I done?!") delivered  to my yard a new planting box, and 40 lbs of bagged planting soil, within the hour.

Posted by Divinebunbun at 8:04 AM No comments:

What Does "Ozark" Mean?

We say “Ozark” but where did that name come from and what does it mean? Is it French, perhaps formerly “Ozarque”? Is it Indian? Which Indians, the Osage, or maybe the Sioux, who named Missouri, calling it Oumisourite, meaning “men with large canoes”? I wondered.

Although the name “Ozark” is fixed on maps by 1815, its origins are unclear. The most common explanation goes like this:

The Arkansas River was a great trade route flowing from Pueblo, Colorado (!), through Kansas and Oklahoma and then Arkansas, draining through a huge swamp into the Mississippi. The Quapaw (Sioux) Indians living in its delta were called the Arcansea, from the Sioux word "acansa" meaning "downstream place," and other Indians called that river the Arkansas before Europeans got there. In 1686, Frenchmen established a trading post about 35 miles north of the confluence at a bend on a tributary. They either shortened the word “Arkansas” and called this place “aux Arcs,” or “place of Arcansas Indians,” or, less likely, they called the river bend an “arc” and referred to the place as “aux arc.” Either way, surviving letters from trappers and traders prove that the post was indeed called something like that. Eventually it shared its name with its whole watershed including multiple rivers and mountainous areas to the north and west, including Missouri.

The Ozark plateau, vast as it is, the size of Tennessee, is pretty much a petticoat for the formerly volcanic St. Francois Mountains in east central Missouri. Travel southwest from St. Louis on Interstate 44 about 30 miles and suddenly an ordinary road opens out onto a majestic vista of hills. Those are the Ozark foothills.
Posted by Divinebunbun at 10:53 PM No comments: 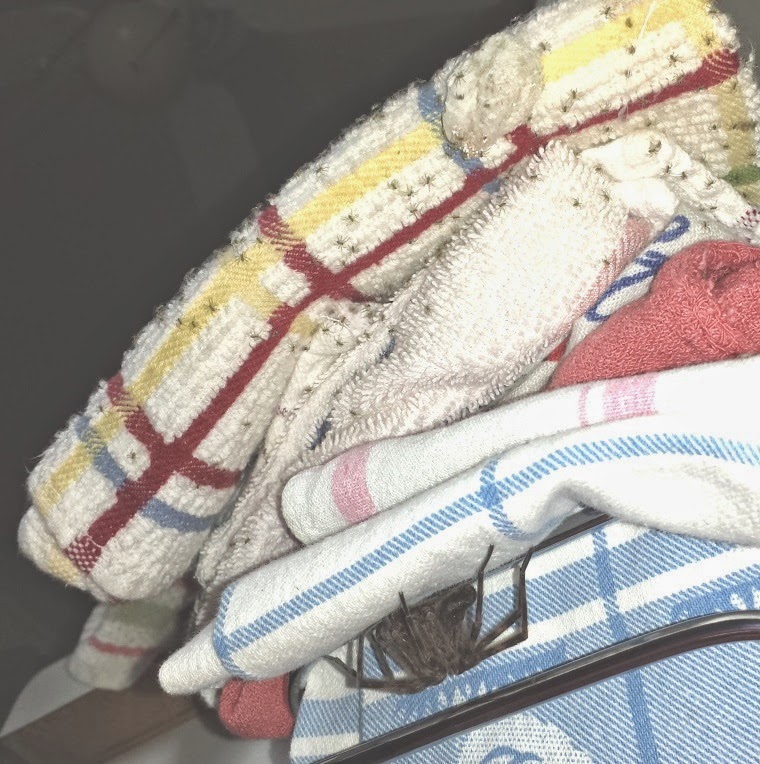 Remember the huge spider in my shower on June 5? It soon vanished and life went on until today, when while yanking a clean towel from my kitchen towel rack, the stacking kind of rack seen in hotel bathrooms, I was aghast to see tiny black crawling specks all over my clean white towel and the other folded towels. Hundreds of -- what, ants? No, newborn spiders!

Quick inspection revealed their cottony white egg case, ruptured (see top center of the photo, a bit to the right; it looks like piece of popcorn), and when I pulled out more spider-infested towels, Mom Spider emerged, fled beneath the tea towels and tried to hide her enormous self, finally dropping to the floor and fleeing into the bathroom. I took all the towels from the rack and threw them into the washing machine with hot water and soap and returned to look for Mom, curled up at the base of the shower, unmoving. I thought because I'd just thrown her babies into my washer that she had died of grief, or else, like the storied Charlotte the spider, finished with reproduction she had no further business on earth. I scooped her up with a long-handled spoon. She clutched it, and I escorted her out of doors, where she is free to make as many babies as she wants.

But what a great choice she made for laying and nurturing her egg case, in a nice soft stack of clean kitchen towels, just outside the bathroom door! Good job, Ms. Wolf Spider! Meanwhile, as I write this, hundreds drown, and any who didn't will roast in the dryer; I expect PETA at my door any minute.[ P.S., the spiders won this round! I washed all the towels without sorting them and now they're all freakin' pink.]
Posted by Divinebunbun at 12:54 PM No comments: 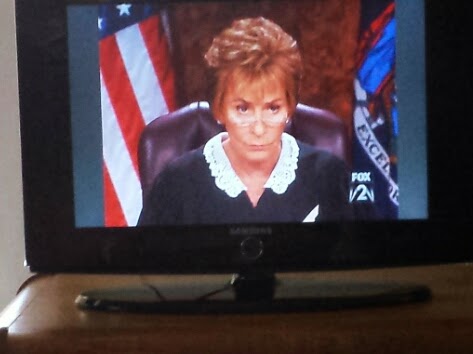 According to Judge Judy, she has 10 million viewers every weekday and hers is the only show I'll take an hour to watch (back-to-back episodes between 4 and 5 p.m.) and the only show I record so I never miss it, and the only reason I pay $35 a month for TV because I regularly watch nothing else now that Jay Leno's off the air.

I know how much she's hated, yet Her Honor fascinates me: a rude, clever, demanding woman skewering the scum of humanity: defaulters on loans, grabbers of steering wheels, owners of unleashed dogs, teenage drunks, no-show DJs, urban BB shooters, non-paying roommates, Craigslist creeps--smartasses of all ages. She's part of what makes America great.

Yet Her Honor is not the whole show. I heart how much the real people look exactly like what they are! The sleaze has the posture, clothing, haircut, makeup, look, voice, facial expression of a sleaze. The skank, the rich suburban psycho, the ne'er-do-well father of 6 children by 4 women, the lazy laborer, or the swole-belly penny-ante landlord--all seem to look exactly like what they are. I'm especially enthralled when the plaintiffs and defendants are from Missouri. Okay, I've admitted it. I've watched for years. Years.
Posted by Divinebunbun at 12:00 AM 1 comment:

Back Roads in July 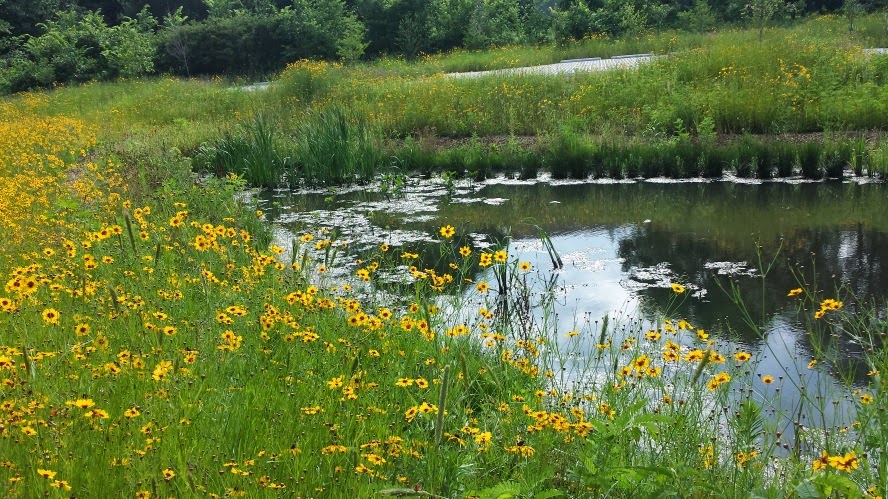 when you walk down your street or open up your back cabin door, pack a picnic and get a move on and head for a Missouri back road. A limited number of July 1sts remain -- grab one while they're still available. Free of charge!
Posted by Divinebunbun at 8:07 AM No comments: