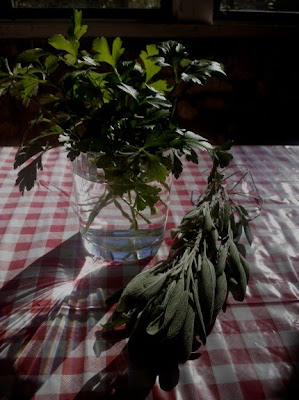 "First hard freeze of the year," said the weatherman. "Especially in outlying areas." That's us. Almanac says the average frost date is October 15 but this year it was Oct. 28. So after finishing all my other work, in the last of the short light I harvested the last of my surprisingly hardy Italian parsley, and cut some sage, tying its stems together and hanging the bunch upside down above the stove to dry out. The thick leaves will actually survive frost and cold so fresh sage is available for turkey dressing. Dried and ground it also serves as incense and purifier. Rosemary grows in a magic spot right next to my kitchen door, about 6 by 6 inches, that receives winter sunlight. It survives outdoors until the temps stay below zero. The parsley, a biennial, reseeds itself; and wherever sage grows, it takes over and makes more and more leaves, like an endless book.
Posted by Divinebunbun at 7:28 AM No comments:

Explaining to the Aliens

I was whisked to another planet last night (that's okay; I wasn't working on deadline) and its inhabitants asked me to describe life on Earth. So I tried:

"Where I'm from, the whole world changes four times a year. There's a rainy time when the landscape is all greens and yellows, with pink flowering trees; then the days grow warm and sunny and colorful, and tiny glittering birds fly around randomly and drink from flowers, and Earthlings play, and plants extrude the most desirable kinds of foods: berries, tomatoes, scented herbs with all sorts of powers, some of them so secret that our scientists spend lifetimes studying them...

"Then fields and trees turn red and gold and orange, and vines bear grapes, which are little sweet meaty orbs in sheer skins, purple, red or green; and many kinds and shapes of squashes, hard-shelled and expressive like sculptures. Those sell for very cheap...Next comes a very quiet, chilly gray period when things, we call 'em snowflakes, weightless and no bigger than a nailhead, sometimes fall from the sky by the trillion and pile up in tons and tons and cover everything. And, get this, each one is a tiny six-sided geometrically perfect design and there are no two alike.

"And these four times repeat over and over, like magic; we just sit there, and the whole world changes all around us. The daylight changes, the constellations shift, and we have this huge perfectly spherical white rock floating in the sky called a moon, and everyone loves it, and it gives silver light and controls all the Earth's water..."
Posted by Divinebunbun at 7:36 PM No comments:

Scary as a Five-Foot Parakeet 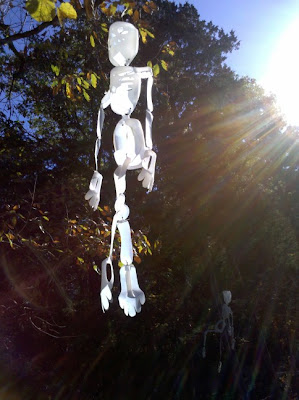 Dangling skeletons appear in my neighbor's trees every year. They are cleverly cut from milk bottles and bleach bottles, and strung together. And creepy? Try to walk past without thinking of death and how your teeth & bones are going to outlive you, about how in the year 2525 someone setting up a meth lab in the woods will say, "Hey man, look over here, I found a skull!" and it will be yours.
Halloween here isn't much because the party everyone says I should have in my woods would be without refrigeration, light, water or toilets, and nobody wants a party quite THAT scary. P.S. Demetrius always said: "Only a fool tries to walk through the woods after dark," and he should know, because he worked part-time nights as a boogeyman. That goes double on the night when his ghost and monster friends from the "other side" are running free.
Posted by Divinebunbun at 11:48 AM No comments: 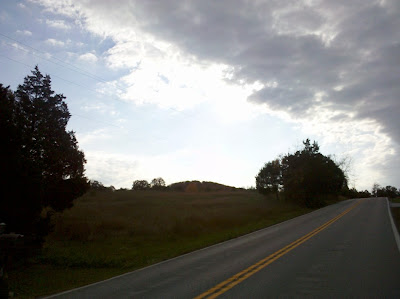 Taking a walk all on my own on a weekday morning on a Midwestern two-lane highway, near the neighbor's horse farm, I have never felt so privileged. I have the world's best life. This is Highway F, which in a half a mile becomes Lynch Road.
Posted by Divinebunbun at 10:25 AM No comments: 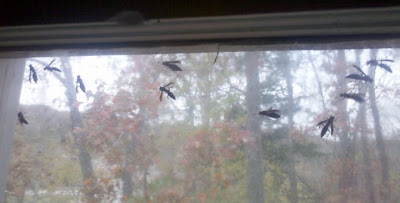 These wasps were born trapped between window glass that's indoors and plastic that is stretched in a frame that serves as an outside storm window. The indoor window -- original to the Divine cabin -- is sealed shut. The outdoor window can't be reached, at least by me. I could pierce the plastic and free these anxious wasps -- not because I like them; they have ancestors and cousins who have stung me when I dint deserve it -- but because their 11 expired bodies will lie between those windows where I'll have to look at 'em.
Posted by Divinebunbun at 10:14 PM No comments:

The kitchen door and screen here aren't flush with the doorjamb. Underneath and through those doors have slunk and marched and flown all sorts of creatures, right into my house like they owned the place. In October, spiders creep in to take refuge for the winter. I once had a Halloween dinner for family and it was as if I had ordered spiders to walk across the room every minute as a party favor.

Mouse settled in and stashed an ounce or two of cracked corn in the toe of a boot I don't often wear. That same year a mouse (the same frugal mouse?) made a silo in the ring-binding of my Betty Crocker cookbook. During a really hard winter when all food is secured against mice, they scratch at and eat my Ivory soap. In the pantry closet, just last month, a mouse chewed a stack of 250 table napkins to shreds and built a fabulous nest of them.

Wasps buzz indoors and sleep or build nests all winter up in a window frame. I found one who drowned in a jar of honey (I'd lost the cap and topped it with saran wrap and a rubber band; the wasp broke its way through). They sleep all winter in window frames, and in spring wake up trapped behind the plastic window insulation. The question is, how do I free them and direct them out of the house without getting stung? (I'd squash them, but they get really aggressive when I try!!)

During the drought of 2006, a lizard in search of water came in beneath the door and spent two weeks residing in the laundry room. I grew fond of him and named him Harrison.

Moths flutter in starting in August, planning to eat my clothes and blankets, and I chase 'em but rarely catch 'em. Once, though, I was boiling some sugar water for hummingbird nectar, and a moth flew right into it and boiled to death. I said to it, "What were you thinking?"

Woke up on a very rainy night, and there in the bathroom was a foot-long blacksnake in who probably came in under the kitchen door so he/she would not be drowned. Night crawlers, plain earthworms, fuzzy caterpillars and large centipedes do this also. These I pick up and throw outside.

Every year a "walking stick" comes and hangs on the screen door at eye level. Clearly he wants my attention. I tell him thanks, but he's not my type. Then he changes his color, comes back and looks hopeful: "Is this more your type?"

Somebody cut the kitchen door wrong long ago -- looks as if it was done with a handsaw -- just about a half-inch too high, and curved -- and it can't be fixed.
Posted by Divinebunbun at 8:45 AM No comments:

Beer: It's Not Just for Breakfast Anymore 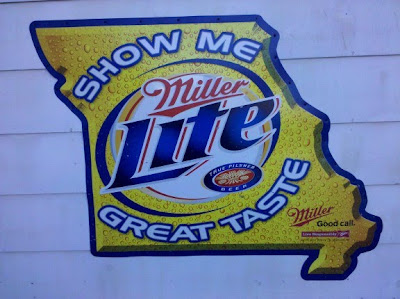 This isn't a native Missouri beer, but us all down here like a cold one no matter what the label on it, and the advertising folks seem to know that in the Show-Me State you show us a beer and we'll drink it, and they seem to be appealing to us and our kind, and you know what? It's time for my weekly Sunday morning beer.
Posted by Divinebunbun at 6:57 AM No comments:

Biggest in the World 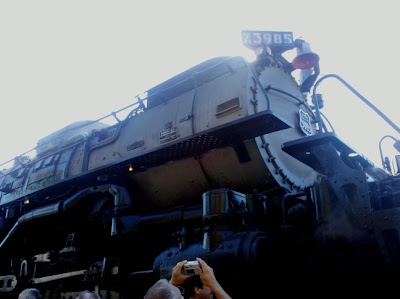 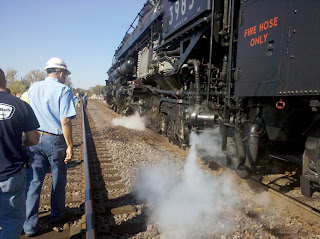 It's Railroad Days in Pacific, and special guest Union Pacific Railroad locomotive Challenger No. 3985, the only operating engine of its class in the world, made a whistle stop this morning for about 2,000 train fans who took photos of this huge mechanical marvel built in 1943, retired in 1962, and restored in 1981. The engine alone weighs 627,900 pounds. It runs on No. 5 heating oil.
Posted by Divinebunbun at 4:26 PM No comments: 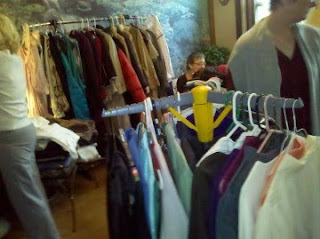 Sunday, Hawkeye invited about 20 womenfolk to her house telling them to bring all the clothes and accessories they don't wear. We put the resulting tons of clothes on racks and tables in all five of her upstairs rooms and everyone picked out and tried on what they wanted and took home what they liked; the remainder to charity. We all got new things and no one spent a cent. Try this with your friends. The more women, the more sizes there will be to choose from, so encourage all your Lillian Russells along with your Skinny Minnies, and serve margaritas and Oreos and whoop up the hen party. As part of my haul, I got a pink T-shirt, brand-new, with hummingbirds on it. It doesn't get any better than that.
Posted by Divinebunbun at 6:02 PM No comments: