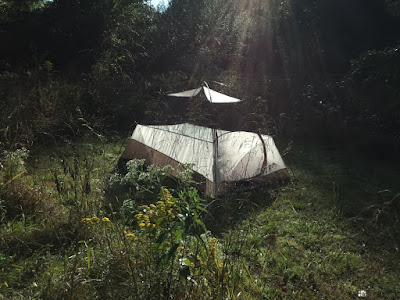 I spent last night in the tent, because I can, and the weather's been gorgeous and clear, stars are vivid, and this meadow is my own yard--I'll always remember nights in the tent. Set it up while the sun set and loaded it with sleeping pad, sleeping bag, extra blanket, and pillow, all ready to crawl into about 10 p.m. The tent's roof looks invisible but is transparent so all night the bowl of heaven and the almost-full moon shine down on me. I woke once and saw Orion rising in the east. In another hour I saw Venus, the morning star. The coming  lunar eclipse is Sunday, at maximum at 9:47 p.m., Midwestern time, in the sign of Aries: the Harvest Moon. An auspicious time to sleep as close as possible to it all.

Remind me these are dewy nights so I'll hook the rain fly on my tent and won't have condensation dripping on and -- surprise -- soaking my pillow before I even get in there, and waking me in the morning when the tent is in fact brightened by sunlight more so than anything around it.
Posted by Divinebunbun at 10:00 AM No comments:

An "End of Summer" Essay 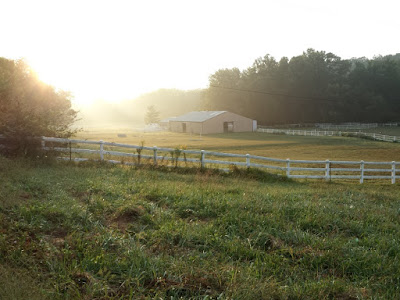 The Summer of 2015 began with me exhausted and bedraggled, burnt out to the core, and spiritually dead. I teach year-round but took this summer off from teaching, my first summer off in three years, and made two great journeys: for the first time to the capital of my own country, Washington, D.C., and then the tour of Newfoundland and Labrador, strange wild Canadian places, as I've longed to see for four years. I got my spirit back. True, no money came in and all my accounts are kaput, but it's been worth it, worth it, worth it: I completed and published a new ebook (under another name), and drafted some new poems; returned some favors; yesterday, glorious weather, I fly-fished all day at Maramec Springs in Phelps County--only my 2nd fishing trip this summer (the first was two days before that). In my tackle box I found the last fishing license I bought: 2012. How did I let that happen? I joined a spiritual group; very helpful. The mammogram was normal for the sixth time in a row. I read books, actual books, which I never have time for, and magazines. I saw friends and met some new ones. I breathed deeply, even outside of yoga class. I bought a bottle of bourbon. I hunted and picked mushrooms, reorganized my computer files, sometimes simply lay on the carpet, relaxing. I went to concerts and a play. On a recent walk I took this photo of the horse farm on Doc Sargent Road.

There are 10 days of vacation left. I will spend them being worshipful and grateful.
Posted by Divinebunbun at 10:15 AM No comments:

Here's to Our Autumn Equinox 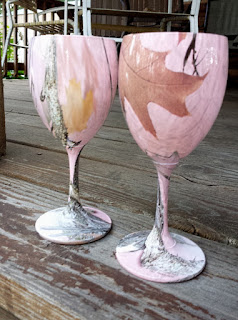 September 23 at 8:20 a.m. UTC or 3:20 a.m. here, the 2015 autumnal equinox, when daylight and darkness are almost precisely equal. Now, I will determinedly list the good things about the autumnal equinox:
These pink camo wineglasses were a gift from a friend who knows my taste in stemware.
Posted by Divinebunbun at 1:00 AM No comments: 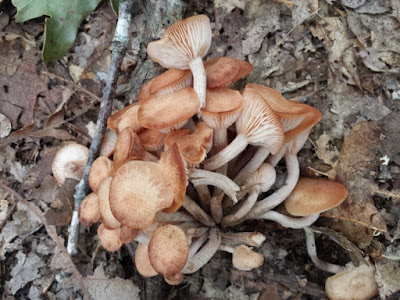 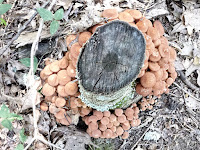 In mid-Missouri woods this week choirs of these mushrooms are growing close to the ground, their cymbal-like caps anywhere from half an inch wide to two inches each, clustered at the bases or stumps of oak trees or bubbling up from buried wood, and from a distance they resemble "hens of the woods," but they've got gills and separate stems and no rings on the stems, so they're ringless honey mushrooms. Whether they taste honeyed I'll never know because the Mycological Society says, "Never eat little brown mushrooms." There's also a "ringed" version, and a semi-look-alike fall mushroom with a bright orange cap that also grows in "bouquets" like these: the Deadly Galerina, also called the Jack O'Lantern. Edible mushrooms to hunt for now include puffballs and "hens of the woods." A famous mycologist told me he frequently receives emails with photos from people who write, "Can you identify this mushroom? I didn't know what it was, so I ate it." Poisonous mushrooms can dissolve your liver and kidneys. Don't risk it.
Posted by Divinebunbun at 6:24 PM No comments: 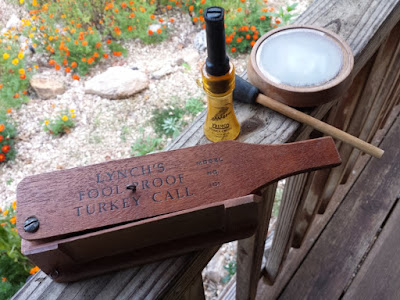 Saw turkey calls for sale in the farm & home store and couldn't imagine how they worked and was too embarrassed to ask anyone. That issue got cleared up this weekend when I got to see and toy with a variety of bird calls. Two of them, top and bottom, work on the same principle: friction creates a throaty squeak. The coffin-like "fool proof" wooden box and the disk that gets scraped with the drumstick sound alike to me, but I'm told that every turkey hunter knows the difference and has a favorite, including the kind that are like a trumpet. The gold whistle in the middle is not a turkey call but a crow call. Why anyone would want to call crows when they could call turkeys, I don't know, and was too embarrassed to ask. Demonstrated also was the very slight difference between a tom's call and a hen's -- hers is warbly, more chicken-like. I am told that upon hearing it the excited tom "will come all over himself" to find the hen. There's so much to learn.
Posted by Divinebunbun at 6:13 PM No comments: 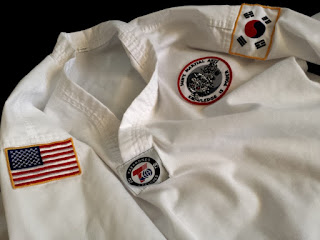 On Sept. 1, I started tae kwon do as a "white belt," the stupidest belt. I did know I must respectfully bow as I stepped onto and off the mats, but not toward blank walls, dummy; toward the U.S. and Korean flags hung in front of the room. I received an all-white uniform and a white belt, symbol of what is kindly called "innocence," and was shown how to tie the belt properly. At home I worked for 30 frustrating minutes before succeeding in tying it. Next class I proudly showed up in uniform with a well-tied belt, and a black belt said, "Your top is on inside out."

Each class begins with calisthenics: pushups, situps, stretches, twists. My 11:00 a.m. class consists of three four-year-olds, a three-year-old, and myself. The sympathetic black belt instructor who knows I'm 58 told me "Do what you can." Thought I was fairly fit from lifting weights and walking.

Because I'm the only adult in the class, the master instructor, Dien, patiently leads me in a set of slow-motion pushups and situps. Then we stand and I follow the master as we practice, in slow motion, intricate arm movements: the head block and I forget what else. Then slow-motion kicks. Unlike a flamingo I can't balance on one leg; the master either holds my hand so I don't fall over, or I grip for dear life a stationary punching dummy. I'm learning the front kick, roundhouse, and back kick, discovering they take foot and ankle strength, exactly the muscles that weight training ignores. Then, drenched in sweat, I punch the bag with my bare knuckles, lightly, concentrating on the target and my form. The knuckles split open anyway. The goal is 60 punches in 15 seconds. At the end of the lesson the master and I bow to each other. Then all other belts shake hands with any black belts present.

Why do this? Because it's only 6 highway miles to the gym. Because the natural year is declining and instead of getting depressed as usual I'm setting a healthy goal: a yellow belt. One must be able to block, kick (without someone holding your hand), punch, obey three commands and count to ten in Korean to pass the exam. After I stuck out my first three lessons, I received, not a new belt -- that'll take months -- but a new top with the school's emblem and the U.S. and Korean flags.
Posted by Divinebunbun at 9:54 AM 1 comment:

It happens all the time in Missouri, not in very many other places, as if Missouri were the land of paradox and the fantastical. From 100 degrees Fahrenheit at 100 percent humidity to crippling far-below-zero Polar Vortex, even our seasons aren't predictable: they could be long, short, too early, too late to start, too cold, too wet; and the seasons have harbingers that are sometimes false (such as this year's cool August leading into hot days in early September) and sometimes true, such as hot weather beginning in early March for the record-setting sizzling summer of 2012.

Behold, then, the maker of rainbows: the sun shower. Many other nations call this phenomenon "The Wolf's Wedding" or some variation on that, such as "a witch is getting married," or "monkeys are getting married." That's according to Wikipedia. U.S. old-timers, reflecting the hard times they had to live in, are likely to say when it sun-showers, "The devil is beating his wife" -- and the rain equals her tears. Last evening we got a great sun-shower example (21 seconds) and no one was harmed.

Posted by Divinebunbun at 12:32 PM No comments: 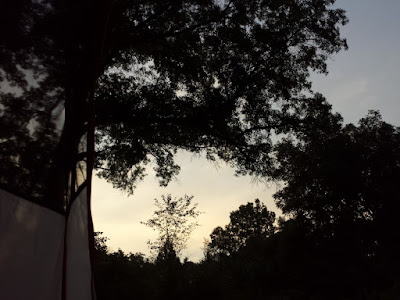 Hearing the sizzle of cicadas and call of the owl, I gazed up through the tent's ceiling screen, my heart beating fast, at the ample sky in the black arms of the tall oak and hickory trees, and at the stars, individual little suns pocking the dark like diamonds, and I thought: It's all so beautiful. What a marvelous Creation. And (it hit me) I am part of it all. I am part of it all! We are all part of it! I felt utterly certain, and marveled.

There is no want! There are no limits! I thought. That's what it's all telling me! Why fear? Why hang back? Why not aim high? Go ahead. Why hate and cower? It only takes you farther from your true source and origins. We are one with the infinite. If only we all knew that, and had the patience of trees, which are rooted to one spot, standing there as witnesses until we "get it."

I was so thrilled I couldn't sleep. I didn't want to. I wanted to feel ecstatically certain forever. But eventually I slept, and the moonrise with its crown of light dawned -- a moon dawn! -- woke me about 2:30 a.m., and then I slept again until the sun's dawn.
Posted by Divinebunbun at 4:17 PM 1 comment:

You remember that French painting, "September Morn," that so shocked everyone in 1912 that it got banned in America, and so on: 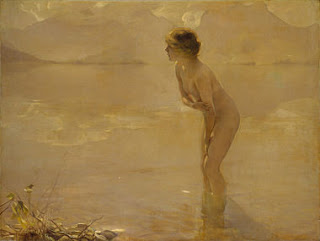 I'm finally coming forward to admit I am the model Paul Emile Chabas painted, having my bath in LaBarque Creek on a September 9 long ago.

Posted by Divinebunbun at 4:00 PM No comments: 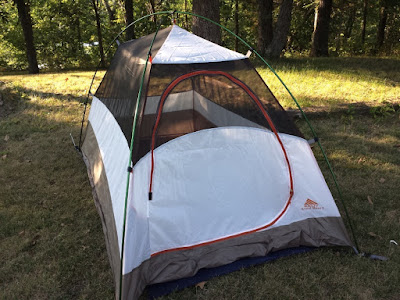 This is a Kelty "Grand Mesa" two-person tent, and I also bought the footprint. Tonight I sleep in it for the first time and anticipate through the screens the wonders of the night sky and creatures sniffing about, and, in this hot weather, an incredibly beautiful, steamy full hour of dawn, all orange and marbled with fog. Think I'll spend the weekend in it.

This is also the first time I set up the tent myself; the very first was in midsummer with my friend Marsha demonstrating the amazingly simple clip-on strategy used on tents now in place of the "sleeve" strategy of my old green-and-mustard dome tent that made erecting it rather like a session of tae kwon do.

I didn't sleep outside at any time last year, and regretted it. Time on earth -- directly on the earth and beneath the night sky -- is important; you live each night only once. There's a foam pad in there and my 40-degree sleeping bag and little pillow and a light soft blanket that in the chilly pre-dawn hours I will love feeling against my neck and chin. See you in the morning.
Posted by Divinebunbun at 6:39 PM No comments: