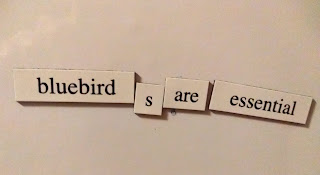 Rain saturated the earth this month and after 10 winters (or more) the 2x6 holding the bluebird box tilted in the softened yellow clay. Despite my many shims, finally it fell and I let it lie there until reminded by an online post that male bluebirds in Missouri start seeking their housing in late February. And I panicked. I need bluebirds.

Only one solution: Quik-Crete concrete. Never tried it before. At the hardware store the smallest bag was 50 pounds. Stunned when it was carted out to the car and I saw 50 pounds of Quik-Crete is no bigger than a party-sized bag of potato chips.

At home I slid the bag out of the back seat onto an old shower curtain and dragged it to the site. Oh my, it really was 50 pounds. Thinking I might have a heart attack I prepared by securing the phone on my person and then opened the garage door so I could crawl into it, shut the door and die there without being eaten by coyotes the same night. Then read the instructions on the bag.

Shoveled most of the water out of the hole. Dug wet mud out until it was two feet wide. Shovel caught on some roots somehow growing through the clay; clipped the roots out. Took breaks, gasping and sweating. Frantically drinking water so as to keep my blood volume. Bluebirds are among the two or three things beautiful enough to die for. Dropped a shovel full of gravel into the hole's very bottom. Unable to figure out how to hold the post upright while pouring, I dragged the trash can into the meadow and leaned it. Now then. Donned breathing mask, gloves, long sleeves and eye protection as the instructions recommended.

The YouTube video guy poured the Quik-Crete directly into the hole, so instead of mixing it and then pouring I wrestled the bag to the lip of the hole, slit it and let the material pour in, fast as possible, face averted from its dust, then poured in water measured into my watering can, meanwhile holding the post upright until the Quik-Crete hardened (mere seconds!) and then fled to the house to shower, leaving tools, bag, mask, etc. in the yard because surely the dust would turn to concrete in my lungs. Relieved to think I would never have to do this again. Now I know why people leave stuff to rust and rot in their yards: They are too exhausted to pick it up.

Fifty pounds of Quik-Crete exactly filled the hole and now it's perfect.
Posted by Divinebunbun at 11:32 PM No comments: 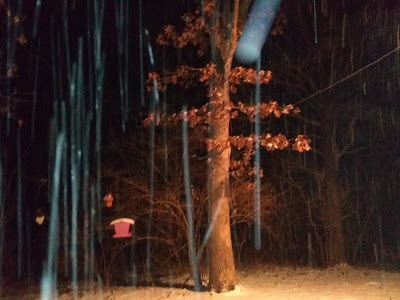 In months without foliage the bedroom window shows me the T-intersection below the cliff and about 200 yards away--dangerous during the best of times because from both ways the county highway curves and comes sharply downhill. On snowy/icy/sleety nights when hearing the snowplow thundering my way to shear snow from the road, I get up to see its lashing yellow lights briefly pass then disappear, thinking: Someone's taking care of us. And someone is hoping he comes home safely and soon.

No one else here voluntarily drives in this weather, so during snows a vast silence is broken only by the plow, usually. Tonight's big wet flakes the TV weatherman called "hamster-sized" (welcome to Missouri), ticked the roof like cornflakes. I went out to take photos with my newish phone, not realizing its camera had automatic flash until back indoors when I saw how the camera flash captured the trails of falling snowflakes, a phenomenon otherwise invisible.

This is the first real winter in several years, with snow days (four or five now) and frozen mix -- my favorite. It really is like driving in that frozen mix of peas, cubed carrots and green beans you buy in the freezer section -- my worst nightmare. So I appreciate the plow and like watching it come up one side of the road and down the other. Beats seeing ambulances and cops converge at our crossroads as happens about once every season. I am told that when I was a kid I did not want to play with dolls but with trucks.

Posted by Divinebunbun at 11:28 PM No comments:

Eat Your Heart Out 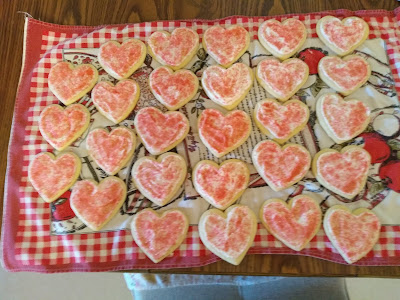 Once again to the rescue on a special day: my neighbor, Terri, with more baking. There were two more cookies before this photo got taken. Now there are even fewer.

On the warmer days (60-70 degrees) the air is like spring water and I saw stubs of daffodils poking up near a tall building where the earth was a bit warmer. On the colder days (18 degrees, snow) we have mass regional stir-craziness with everybody retreating into their favorite vice because a genuine, hat-and-gloves wringing-wet winter such as we are having, while formerly normal, is now unusual and distressing, we have had several "snow days" and slippery roads, and this year Lent and its fish fries are still weeks in the future.
Posted by Divinebunbun at 11:09 PM No comments: