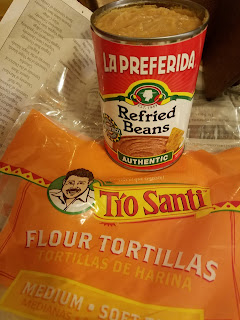 When money is short, a grocery five miles from here sells canned beans not for 89 cents or even 79 cents but 59 cents, and for $1.29 per pound, dried navy beans I cook up into "U.S. Senate Bean Soup" (in Washington in 2015 I ordered and ate the real thing, served by law in the Senate cafeteria daily) that'll feed me five meals' worth. If I'm lazy I'll spend 99 cents for a can of Preferida brand refried beans already mashed with lard and spread it on warmed Tio Sante tortillas with cheddar cheese and salsa, or, even cheaper, on yellow or white corn tortillas that came packed in a huge stack of 36, costing almost no money (scissor corn tortillas into quarters and bake them into tortilla chips).

All this good cheap stuff was in the store's Mexican section, with goods such as these plus canned chilies and so on, taking up about one-third of a row of shelving. Last time there I saw these cheerfully red-, white- and green-labeled cans and bottles, and Tio Sante wheat tortillas, up in front of the store on a markdown table, and felt chilled to my bones.

No one was buying them anymore. The Mexicans or Central Americans living and working around here, scared of being jailed or deported or losing a family member to the immigration police, are gone. Whole families used to shop the grocery store and Walmart chatting in Spanish, cool to listen to. Gone.

Thinking of this my eyes fill with tears even if I don't want them to. They were working here. Some of them spray-washed the siding on the Divine Cabin and my neighbor's house, and a couple of years later, put new roofs on them, a crew of four starting on mine at 6 a.m. and not leaving until past dusk when the job was finished. The foreman spoke enough English to say hello. They would not look at me straight on or accept offers of coffee or bottled water. I used to see Spanish-speaking men wearing blue or tan uniform shirts lunching at the picnic table set up next to the Walmart parking lot.

I miss them. Where'd they go? Were they arrested? Are they safe back where they came from? My father was an immigrant who worked in a foundry and when somebody disses immigrants, legal or not, I let them know that. If they're doing a job you wouldn't want to do, shut up.

Posted by Divinebunbun at 8:45 AM No comments:

Things To Do in Less Daylight 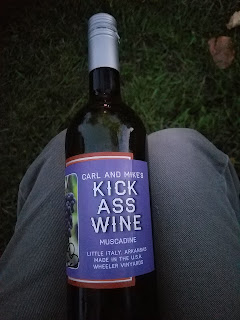 Posted by Divinebunbun at 9:19 PM No comments: