Leaking water heater sops the towels that I cover the floor with. Changed em once a day, now change em twice a day. Disaster is imminent. Handyman Darryl says the reason the place is going to hell in a handbasket is that I live here all the time, don't I ever travel around the world or something and leave him to shut off the water supply and update the bathroom and this whole house? And he strongly hinted I ought to.

So I did look into world travel, but can't afford to go gallivanting even to Wisconsin for ten days to two weeks, and furthermore don't want to -- this is the only place in the world I want to be -- so thought about renting a portable outhouse for the duration of in-home construction. Emailed for a quote on the simplest model. It costs $120/per. It didn't say "per" what, but studying it hard I realized it costs $120 per DAY to rent a port-a-potty. Pardon me, but since the facilities would be outdoors anyhow, an empty coffee can makes more financial sense.
Posted by Divinebunbun at 10:34 PM 1 comment: 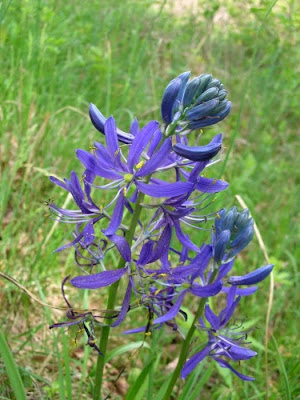 I favor blue flowers, and today I saw this, for the first time, over by the bluebird box, and looked it up. It's a Wild Hyacinth (Camassia scilloides -- there's a mouthful). "Common," says the handbook, Ozark Wildflowers, "in dolomite glades, open rocky slopes, open woodlands, and prairies, found throughout the Ozarks." That's a perfect description of the land I and my neighbors live on; it has all those faces. The handbook also said Indians ate this, but that it's better not to.
Posted by Divinebunbun at 3:45 PM No comments:

The Shrine and Brother Matthew 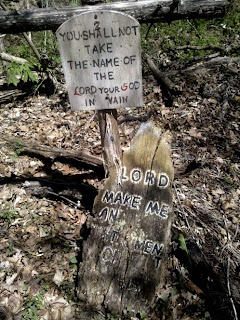 Down the road a piece on 100 acres is a Catholic shrine to Our Lady of Czestochowa, a place in Poland. The "chapel" part is just open-air with a tin roof over it, plus some pews and banks of eight-day candles, usually deserted except Sundays. I go there occasionally on Mondays. I listen there for messages from God. I figure He hangs out there, listening to prayers. I must say that in Missouri, messages from God seem rather more common than they did when I lived in Boston, Mass.

Not far away is a path to a healing spring. Along the path were strewn and nailed up all sorts of signs, plastic flowers, photos of Pope John Paul II, stations of the cross, warnings ("Silence"; "Straight is the Way and Narrow is the Gate," nailed above an actual narrow wooden gate; "No Dogs or Horses") and all sorts of spiritual sayings as in the photo.

The path to the spring was once well-kept by Brother Matthew, a hermit from the nearby Franciscan community; it was he who painted, decorated, pruned, rebuilt, restored. Around age 70 when we met, he invited me to his hermitage one day. Brother Matthew had been to art school sometime in the 1940s, and the hermitage was full to the ceiling with canvases. All sorts of subjects, not just religious. Used to see him around, in his brown robe, occasionally in town; he was a presence and a character. He is gone now about four or five years, and the path to the spring -- flooded, vandalized, broken-down with time -- is about ruined, with no one to keep it. Here's a photo of something of what's left. There's been ads in the local paper looking to collect Brother Matthew's paintings. I wonder where they are now.
Posted by Divinebunbun at 12:36 PM 2 comments:

Approximate arrival date of my hummingbirds is usually 24 April. But I'm so eager to see them, so hopeful, I filled and hung the hummer feeders last week. I understand that if fed they will return to the same location every year -- that's why I call them mine. These little birds -- I don't know what it is they give me -- their elegant hovering and pivoting, their dainty honey-sucking, their small throaty communications -- maybe it's because I never saw one until I was way grown up, or because this is the first place I've lived that has attracted them.

Anyway, it's a ritual, and now I have a relationship with them, and every April I wait for them like a 13-year-old girl.

Stuck in the house yesterday because of pollen so thick it yellows the tablecloth and coats the inside of the car, I was talking on the phone about 10 a.m. when I saw a male rubythroat hummer at the feeder and went wild like a 13-year-old girl. MO Conservation calendar, which is sort of an almanac, designates the 25th as their arrival date, but here was one in the 19th. But I haven't seen him again, and he may have been passing through. But now I know mine must be on the way. Made fresh nectar for them: 4 parts water to one part white sugar. Combine and boil, then cool and serve.
Posted by Divinebunbun at 8:54 AM 1 comment: 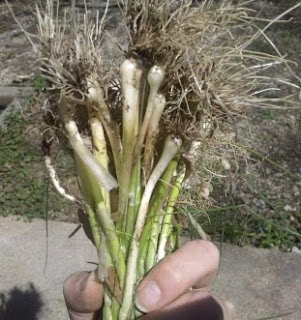 Wild spring onions -- aren't they gorgeous? -- are one of the two crops I gather from the property, absolutely free, the other being hickory nuts. What I'll do is pick one or two pounds of onions, wash them, slice each stalk into narrow rings, air-dry them, and they're ready for packing into freezer bags for a whole year's use when a recipe calls for those elusive "scallions."

Pick your own! You will see nice tall assertive onion stalks mostly in disturbed ground or in lawns. Pluck them up! Eat them! Make sure the ground is pretty dry, and then the stalk gives just the slightest, most delightful resistance as you pull. They even smell wonderful! Take care not to pick them along chemically treated, oil-polluted roads -- although I have noticed grow well there.
Posted by Divinebunbun at 5:09 PM No comments: 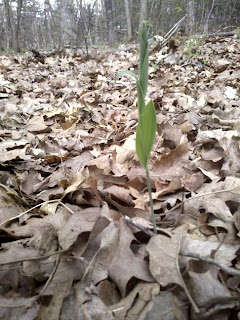 I look with reverence at plants. Brave things, alone, unfolding out of rock, or between cracks in sidewalks, or in the dark where they live on little love or water. They freely give fruit that's the basis of the food for all living creatures, and flowers that feed all sorts of amazing aerial and terrestrial creatures (a bunny just ate the leaves off my sole surviving baby kale!). In a a miraculous partnership plants trade oxygen for the carbon dioxide breathed out by those of us who are mobile. The finest trees grow greater and more impressive as they age, falling with a mighty crash, totally spent, after a hundred fifty years of patiently waiting for human beings to "get" what trees know and demonstrate and witness: that everything's a miracle and it's enough to be alive, stand still and contemplate it all as the earth turns through starry space...
Posted by Divinebunbun at 10:34 AM No comments: 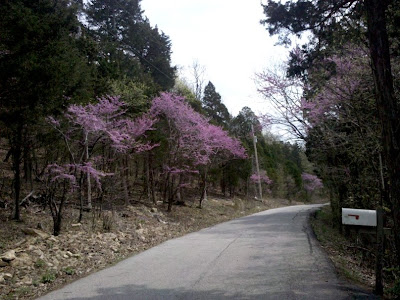 Picture of the road next up from mine. No rhyme or reason to these; they're along the roadsides, not in clusters, scattered, but there is nothing like Missouri redbuds this time of year, making pink glory out of the life we've got. I heard that I could strip the flowers off the branches and eatum, that they taste good, but I'm not quite that hungry, thank you. I admire too the city's fine magnolias and weeping-cherry trees, but wild flowering trees like redbud and dogwood have my vote for most romantic.
Posted by Divinebunbun at 9:28 PM No comments: