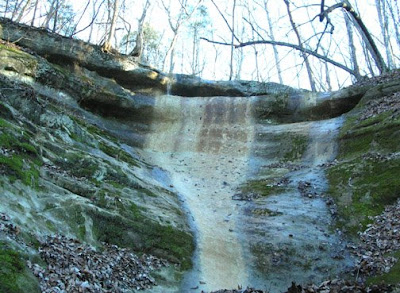 This one trickles from top left and falls down a 20-foot, water-worn chute into a small pond.
Posted by Divinebunbun at 5:09 PM No comments: 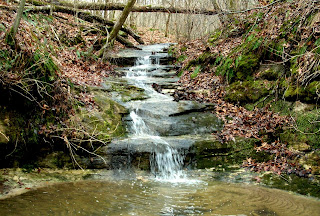 Yesterday's strange heavy rains inspired this first in a series of portraits of the 5 waterfalls on the Divine property, which is in the Meramec watershed. This waterfall plunges into a perfectly circular, stony-bottomed pond. I find waterfalls to be very sensual.
Posted by Divinebunbun at 6:57 PM 1 comment: 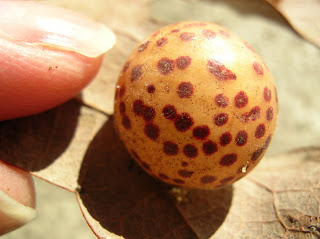 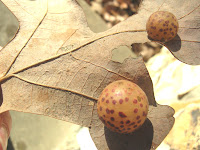 Never saw this before, thought it was a fungus, but no; these are former homes of gall wasps who specialize in setting up housekeeping on the undersides of oak leaves. Taken yesterday. Latin name Cynips quercusfolii. Say that and you've said a mouthful.
Posted by Divinebunbun at 3:29 PM 2 comments: 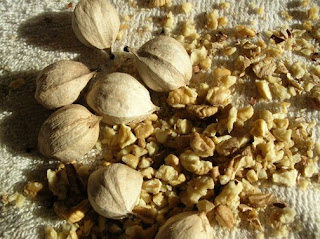 Christmas is the day to crack nuts and eat 'em. The hickory-nut crop collected in October I kept out on the porch until they were nice & dry and the shell gives up the nut easily -- or as easily as it can considering I crack 'em open with a meat mallet -- you know, one of them you use to flatten chicken breasts, or beef for what they call tornadoes in the restaurants. The nut is sweet and tasty. Rather eat those than candy. Although if you got candy I'll force myself. And I'll thank you to hand me off that turkey leg. Merry Christmas.
Posted by Divinebunbun at 2:40 PM No comments: 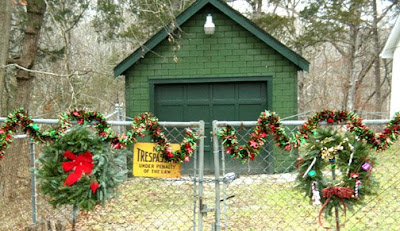 Remember Sammy, unsuccessful suitor of Shelley? Well, he snuck down our road in his blue pickup this morning, and I knew he was fixin' up yet another holiday display for the woman of his dreams. Garlands, ribbons, wreaths, tinsel, Santas, etc. This photo ain't the half of it. True love. I hope Santa brings poor Sammy a new girlfriend. This year Santa brung me David, and I don't want nothin else.
Posted by Divinebunbun at 2:50 PM No comments: 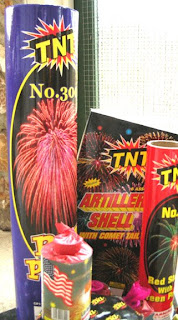 Fireworks are legal in this county, 20 Dec to January 10. And the county next door, right over the border, has 3 fireworks superstores where I buy mine. Solstice (coming up Sunday) is the best, better than July 4. It gets dark early and in late December I'm a-just itching to blow things up.

If you want to win my heart, bring me $200 worth of fireworks early on in the relationship.

Fun explosives include:
-Artillery shells: Tangerine-sized papier-mache spheres that shoot 100 feet into the air and explode into those loose starry formations you see on July 4th.
-Individual artillery shells: I bought three, one with 300 grams of gunpowder -- that piece alone cost $13 -- and I can hardly wait to light the fuse.
-Rockets (fun).
-Bottle rockets (you ain't lived until you've tried to set off a gross of bottle rockets all at once; not recommended).
-"Rats": 50 to 500 cigarette-sized cylinders of gunpowder laid side by side and tightly wrapped together; light 'em and they explode one after the other. The horrible racket and stinky smoke are so COOL!

Not Roman candles though, except in a pinch. Those shoot upwards and deliver ten loud bangs in the air. You stand there and count all ten. It's just too predictable. When my niece is here I buy cones and fountains because they do not go airborne, aren't noisy, and the fountains of sparks are very pretty.
Posted by Divinebunbun at 8:57 PM No comments: 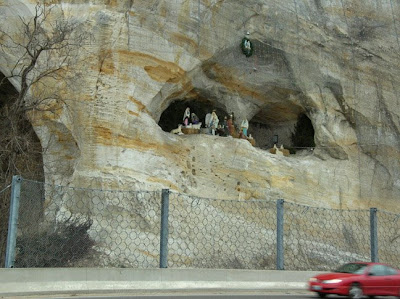 Those huge bluffs that to this day get mined for silica have big holes in them, one of them just right for a life-sized Nativity scene. To its right is a Christmas tree and some lighting equipment and wiring for nighttime display. Now, who says there's no art and culture around here?
Posted by Divinebunbun at 3:40 PM No comments:

Spring is in the Air

Yesterday was warm, 45 degrees at noon, good for a walk up a local road so steep it ought to have steps cut into it. Hill on one side, fantastically deep ravine on the other. Light ice and sleet from the night before (rain gauge said .4 inches) had melted that morning, and up from the earth and trees came a smell of loam or leaves or something growing, just like spring. I stopped to inhale it. Just like spring!

I smiled. It's December. Look at December from the proper perspective, and spring isn't really far behind. That's why I love Missouri. I've seen crocuses here as early as Feb. 2. That's just 8 weeks away!
Posted by Divinebunbun at 1:25 PM 1 comment:

"Ain't nobody gonna do it for me."

That's what I tell myself when I'm in a "situation" or a jam. Like yesterday, had to carry an 8-foot wooden ladder. Weighed quite a bit and awkward. Then I had to arrange it upright against the house. It took everything I had. I even had to let it go and drop it once, it was so heavy. And then I had to climb it. And then get back down. There was no choice. But I tell myself, "Ain't nobody gonna do it for you," when I need, but don't want to:

Wish there were magic lamps with genies inside that would come out and do things for me, but there ain't. Today after looking all over for advice, and just about giving up and taking it to the man, I fixed the CD drive on my computer all by myself.
Posted by Divinebunbun at 6:17 PM No comments:

Email ThisBlogThis!Share to TwitterShare to FacebookShare to Pinterest
Labels: country, december, do it for me, health, missouri, ozark, self-reliance, winter 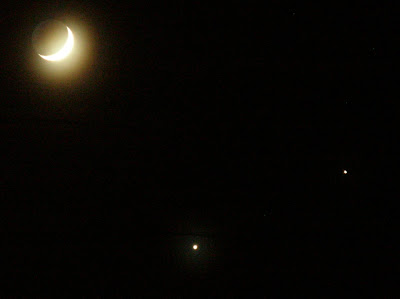 Had to show you this photo I just took, although I hope you saw it "live" -- of tonight's conjunction of Jupiter, Venus, and the moon. In astrology this night is considered very lucky. Hope it is for you. I set the camera on "infinity" and went for it. And happy December -- the month with the prettiest name.
Posted by Divinebunbun at 6:54 PM No comments:

What Has a Yellow Belly and Sucks Sap? 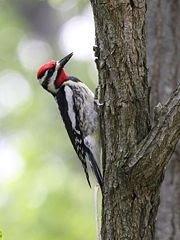 Woodpecker, seen through the bedroom window, looked like a Downy but with the barring across its back all in disarray. I looked harder. It had a red chin. Peterson's told me it was a Yellow-Bellied Sapsucker, only the second I have ever seen here. Its yellowish belly is sometimes hard to see.

The first one appeared on my birthday, one January, some years ago. I considered it God's birthday gift to me. And here's one on Dec. 1. This area is the northern edge of their winter range, and they tend to winter somewhat farther south, preferring the West Indies (who wouldn't?), so I know he's passing through.

The photograph is from Wikipedia. I'll keep my camera handy; maybe the sapsucker will agree to pose.
Posted by Divinebunbun at 1:00 PM 1 comment: