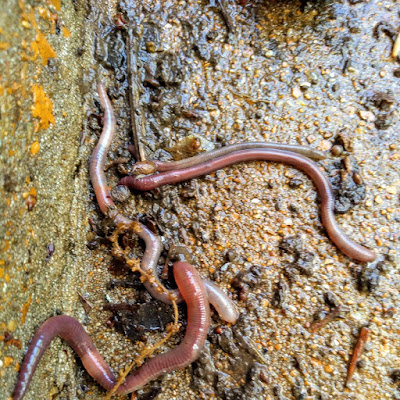 A conservative was here over Easter talking about Jesus Christ when a wolf spider woke from its winter's nap and went hunting in my carpet, and the guy's eyes widened and he asked when I was going to kill it. I said, "Wolf spiders are harmless. No reason to fear. They don't bite. I never kill wolf spiders; they eat cockroaches (occasionally, a roach comes up the drainpipe here) and other bugs. They're not interested in you." He kept an obsessive eye on it. I tried to put him at ease saying, "You haven't got anything it wants." He urged me to kill it. I said, "It's one of God's creatures," and that shut him up.

The month of May means other "Thingz" are coming alive in multiples as millipedes wiggle-waggle across the linoleum like they own the place. I deposit them outside, with mixed feelings, because they belong out there but might also become some songbird's meal. That's the chance you take. Outdoors, after yesterday's heavy rains, beneath the garage door and a packing of wet leaves were lots and lots of worms, a sort of urban worm center, all wiggling and alive. Worms are our friends, and alive is beautiful! To me they looked like art.
Posted by Divinebunbun at 10:37 PM