The Design is Perfect 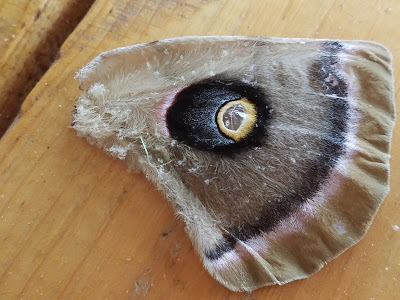 All I found was one moth wing. I carried it into the house and folded it into a piece of paper until I had time to study it. Its owner was a Cecropia moth. I especially loved the transparent porthole "lens" in the center of the wing's "eye" that prevented the wing from being a total blind spot and was designed to look to some predatory creature like a hungry snake's or owl's eye. Here you see the wing's obverse and reverse. 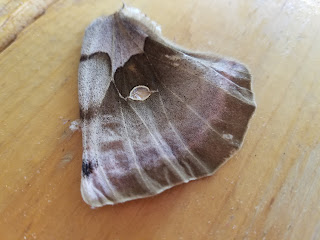 Cecropia moths live only to reproduce. They don't eat; they don't have mouth parts. They live two weeks. I would like to know and feel what its life was like. Is it possible that we who are much more complicated creatures do know or can know? Could I ever articulate it?

The wing is furred, colorful, beautifully shaped, functional, and despite its delicacy isn't fragile because it survived its owner and two weeks out on the porch. I'm so glad I found it. It's a reminder that nature's design, behind it all, is perfect. We simply have a blind spot about our own perfection.
Posted by Divinebunbun at 8:33 PM