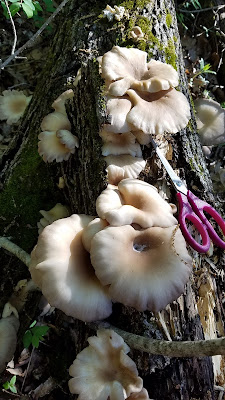 A known oyster-mushroom log at the entrance to the eastern woods produced these fleshy beauties in late April (photo taken 27 April); the scissors help show the size. I'd been harvesting that log for about two years, April to December; the whole area around it was rich in mushrooms edible and non-edible because that opening was a game path as well as my favorite path, and 'shrooms love to grow in disturbed earth.

Then one day in May came a huge New Holland earth mover that for no reason broke through this log and others and treaded well into the woods, crushing to mud the best chanterelle, oyster, and Bearded Tooth patches I have cultivated and picked from for three or four years. Apparently it was for no reason except wanton destruction. They went into the woods as far as the dump but did not clean it up. I don't own the land so I can't object and besides, what's done is done.

It's a heartache. I visited the site again today and can't set it right. Chanterelles are due in about four weeks, if conditions are right. I seeded those everywhere in that area of woods, so I believe all is not lost regarding chanterelles. But the oysters? If I am good, I will be led to more. Maybe this mechanically disturbed earth will make hunting there even better one day, when the scars of the treads heal over.
Posted by Divinebunbun at 3:47 PM