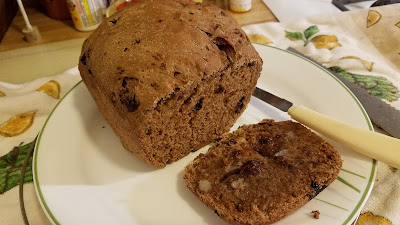 Hankering for Raisin Rye bread I went from bakery to bakery inquiring. The bakers, sounding puzzled, said "Raisin rye?" "No, we never made that," as if they never heard of it. In Hermann, MO, where the German bakeries are, I again asked for raisin rye. None. Strange; I used to have it all the time (good with tuna salad, or for breakfast) -- or so it seemed. Friends hadn't heard of it. Did the world run out of it? Had I dreamt it? I googled it and it was not a dream.

I probably never bought raisin rye bread in St. Louis. It's not a German bread. Some say it has French origins but my hometown 400 miles from here is full of  Swedes and Danes, and they bake and are known for rye breads (as are the Finns) because in Scandinavia wheat won't grow but rye will. Dried grapes from warmer places on the continent came to Scandinavian port cities, and somebody put them in rye bread where they are very tasty. It's a food from my childhood. Thus my instinctual and inexplicable craving for it.

This fragrant home-baked loaf is probably a travesty because I added density and bite with a tablespoon of pumpernickel in with the wheat and rye flours. Recipes include shortening, molasses, cocoa, sourdough, coffee, cardamom, pecans or walnuts, fennel, orange zest, the water you plump the raisins in, grated Vitamin C, cinnamon, icing, buttermilk and starter, to name a few; such an array that raisin rye seems like an edible canvas bakers paint with their favorite flavors. Lots of bakers won't work with rye; it has no gluten so it doesn't assume the same lordly shapes of classic wheat breads.
Posted by Divinebunbun at 12:30 AM