Problem We Do Not Have 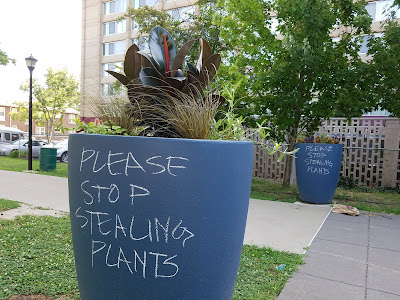 Used to live exactly one block from here, for four years, and before that two blocks from here, for six years, for a total of ten, among many poor folks trying to make a dollar. The rapper Nelly grew up on my street while I lived there. Look, rent was $255 a month and my income was $500 a month and stayed that way for two years, and my landlord (owned both buildings) never ever raised my rent from the starting rent because he wanted to keep a tenant whose checks did not bounce.

I laugh sometimes at life in those close-set apartment buildings. Cats sang in chorus in the back alley and woke us all, and tenants on the second and third floors raised their windows, screamed swearwords, and pelted the cats with shoes. Summer barbecues smoked on every fire escape and the party hosts gave away their ages by the music they were blasting. Once a crew removed my fire escape (I guess to replace it) while I was at work and it was the only way to enter my apartment because I had police-locked and chained the other door. The workers still there put a ladder up to the second story and told me to climb it. I was wearing a skirt but also pettipants, and blessed myself for wearing pettipants and being fit. I was in my late 30s then.

I got very good at -- right in this spot in this photo -- darting at top speed through an alley in order to cut five minutes from my walk home. Then I moved to the Divine Property. These days the old neighborhood has been upscaled and landscaped and at night the alley is floodlit. They've even put benches along that walkway to make it seem parklike, and plants in planters to make it pretty. But apparently people want plants badly enough to steal them. I now live where there are plants galore and we worry they'll be eaten by deer.
Posted by Divinebunbun at 8:46 PM