I Do Wrong, and Then I Do Right 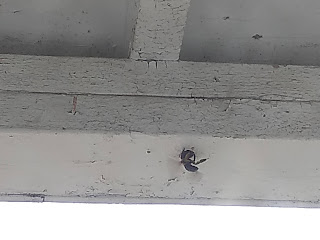 A plump bumblebee buzzes bounces all day in front of my door every spring and summer, upward and down, and then moving laterally, persistently, and I understand that its "dance" is communicating with other bees. A second bee, this one, joined it, but I'm having guests and I don't want hovering bees, about 18 inches from my front door, to scare them. The bees live in this burrow in the little wooden canopy above the door (with plenty of holes in it), and the slenderer bee, this one, has been going in and out of the perfectly round little hole, about half an inch diameter, and what's in there I cannot guess.
So about 1 p.m. I got scotch tape and the stepladder and taped over the hole. Fixed!
Oh. This bee worked for an hour trying to get back into the hole while its friend the bumblebee bounced around in what looked like a panic. It probably felt as I did trying for hours to link the Mac's new Big Sur update to a 2010 Brother wireless printer that until Big Sur worked fine. I remembered that we should be good to bees. Wasps are another story, and they've stung me, but bees, never.
I realized I had been thoughtless and had done wrong to creatures who lived here all season every spring and summer and had never done me wrong. After an hour and a half this bee was still trying to nudge its way past or through the scotch tape. I got on a stepladder and stuck a chopstick in there to break the tape. The hole was open, but not wide enough for the bee to shoulder its way through, although God knows it tried. Bringing the stepladder once again, I reached up and clawed all the tape away from around the entrance to their home/office/palace/nest. There now.
We all feel better. I had to buy an updated printer, finding out after calling everybody that Big Sur simply does not and never will support the printer I had.

Posted by Divinebunbun at 3:46 PM No comments: 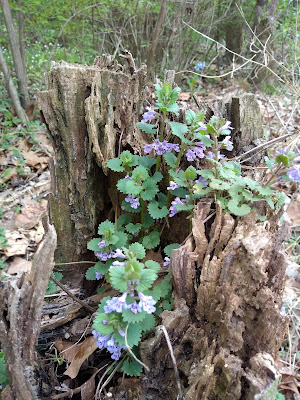 Wild mint is fun to find and harvest. There's a type that's poisonous, with white flowers on tall stems, but roll a stem between your fingers, and if the stem is square -- you will feel how it's square! -- you can have free mint leaves. There are six kinds of mint in Missouri. Although this is ordinary "ground ivy" (Glechoma hederacea) it smells wonderful. I found it creekside, in the hollow of a tree stump, its tree gnawed down by beavers long ago.
I had made a favorite India-themed pink lentil soup, and the recipe recommends a garnish of mint leaves. In winter I do without. How lucky I am in spring to simply walk down the road, onto the path I cut, and there was my mint, presented artistically for nobody's eyes ever, unless I happened to seek it out.
Posted by Divinebunbun at 2:41 PM No comments: 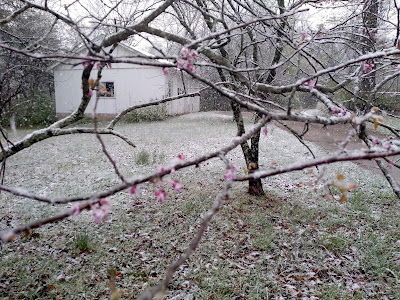 A "Dogwood Winter" is a cold snap after the dogwoods have bloomed, usually mid- to-late April. Surprise, it snowed here on April 20, flakes wet and splotchy enough so I preferred to photograph snow on my redbuds rather than the dogwoods 50 feet farther away. I believe April 20 is the latest snow I've seen in Missouri. (In upstate New York I watched snow fall on May 6.) But I had to go out again anyway to brush snow off the satellite dish.
Two hours after the snow ended it was all gone. I didn't dream our Dogwood Winter: This morning we broke the temperature record for an all-time low with 30 degrees. The previous record: 32 degrees in 1904.
Naturally -- naturally! -- I had an appointment at 8 a.m. and had to pull out the winter coat and pair of gloves (on Monday, we'd had 72-degree weather). There's a "blackberry winter" that according to the Farmer's Almanac comes even later to the Midwest and South in spring. Hope we don't have one.
And by the way, at 2:30 a.m. on April 20 we also had a little earthquake. It didn't wake me, though, not like the one in April 2008.
Posted by Divinebunbun at 9:22 PM No comments: 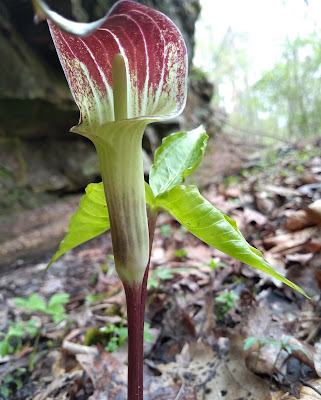 Yesterday I led a quick guest tour of the property, including Waterfall #1, Waterfall #5, and "the beach." Sloshing our way up a rill to Waterfall 5, the mud nearly pulled the boots off our feet. I've posted photos and video of our waterfalls, but never a Jack-in-the-pulpit because the last time I was in the right place at the right time to see this awesome dramatic springtime wildflower, I didn't have a smartphone, so we are talking before the year 2008.
Jack-in-the-pulpits are in fact rare plants.
Every spring since then I have hoped to see one. While the guest photographed the waterfall, I knelt in the soggy loam to photograph the Jack-in-the-pulpit. At home, after a shower, I looked my photos over. None were razor-sharp; none expressed the Jack's imperial presence.
So today after a morning's work I suited up in bad clothes and trudged back. Rain had fallen overnight so the mud was muddier. I didn't see the Jack. Was it one of those flowers that last only one day? I sat by the rill and let the view settle around me and in five minutes found the Arisaema triphyllum. All by itself. There wasn't another.
Determined to get an expressive photo (the majesty of the thing!) I took pictures of it for half an hour. The flap over its top meant getting the camera down so I could shoot upward. I sat down in the mud. Then lay down in the mud. Mom always said I was determined. And I wasn't about to let you down.
Posted by Divinebunbun at 6:59 PM No comments:

Meet Mr. Richard DeVoto, well-named assistant to Monsignor Harry L. Byrne who directed Father Dunne's Catholic home for orphan boys, founded by Father Peter J. Dunne, himself a former orphan, in St. Louis in 1906. Byrne directed too a summer camp for the boys, open from 1941 to about 1971.

The Divine property is near what's left of Father Dunne's camp. Mr. DeVoto shared memories of camp life from 1960 to 1964. DeVoto later did two tours in Vietnam and was employed by the Department of Natural Resources and the State Highway Patrol until retiring in 2014. "Lot of happy times here," he said about the camp, "lot of happy times." The videos were recorded in early autumn 2017.

Was there a school bus from St. Louis to the camp? Oh, no. Every year DeVoto drove a station wagon with seven campers at a time until all 40 were present.

"From breakfast til midnight" DeVoto was on call for his boss, who lived in a cottage on the grounds. Monsignor Byrne was "from money" and paid for camp fireworks on the Fourth of July, and for the boys' high-school graduation parties, and some of the boys' college tuitions, and "if something was for himself he always paid for it, always, out of his own pocket. In 1963 he had a 1956 Cadillac," DeVoto said, according to my notes. "He never mixed his money with anything. He was always giving me money -- twenties! Whoever back then had $20 bills?!" Monsignor kept a piano in his cottage's living room. "Everything was meticulous," DeVoto remembered. The back garden at the monsignor's cottage, walled with pink brick, overflowed with daylilies and petunias, Monsignor's favorite flowers. DeVoto was expected to serve cocktails to the monsignor and any adult guests at precisely 4:30 p.m., and dinner at 6:00.

Also on the scene were colorful characters such as the resident caretaker, Mr. Chilton, who "always did everything the hard way"-- like building a snowplow out of wood; a visiting priest from Kankakee constantly on the phone with his stockbroker; St. Louis Archbishop (later Cardinal) Joseph Ritter; and Brother Matthew from the nearby monastery at St. Joseph's Hill, an artist the monsignor commissioned to paint his portrait. In my early days in this area, I met Brother Matthew at St. Joseph's Hill and visited his hermitage -- filled to its ceiling with painted canvases.

Posted by Divinebunbun at 3:11 PM No comments:

Bluebells by the Acre 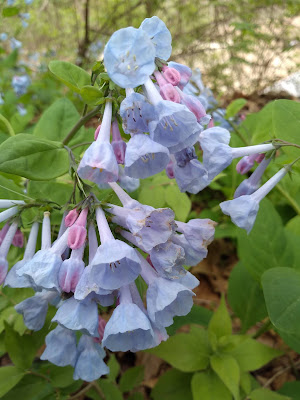 Did you want to see bluebells growing in their native sort-of-swampy habitat, during the peak of blooming? Me too. Today I took happy advantage of the creek-side path I personally cut through the woods in fall and winter. The farther I walked, the more bluebells (Mertensia virginica) there were, to the left, right, ahead, behind. Golly! 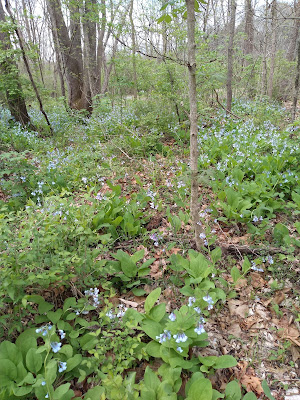 Posted by Divinebunbun at 4:41 PM No comments: 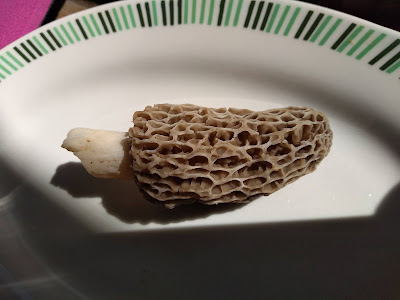 If you live around here -- east central Missouri or thereabouts -- get out and go looking, because now, now, now is the one week of the year you'll find morels. Look near paths or lawns or streams or game trails or parks -- any place that the earth gets regularly disturbed, because fungi like that.

I've been patroling for a week the strip of land where I found eight morels on the property last year. Twice a day I looked. No dice. Yesterday, enjoying some spring sun, I found a game trail not too overgrown; while cutting brush this past winter I'd opened it up a bit. Brushed my way on in there with my folding stool and had a seat where I'd never sat before. This is a wooded clifftop area. And what to my wondering eyes should appear but this nice fat good-sized morel. Just one. Only one.

Normally you'll find morels in groups. Believe me, I looked for more; there were none. I figured this was a gift from the gods feeling sorry for me for looking so hard, walking up and down, finding zero all week. Here's a glamour shot. I sauteed and ate it within the hour.

Now stop scrolling and go out and hunt!

Posted by Divinebunbun at 4:17 PM No comments: